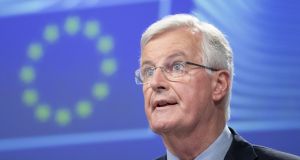 EU chief Brexit negotiator Michel Barnier welcomed the British decision to finally put forward a text on the Irish Border, but he questioned the time-limited nature of the proposal. Photograph: Jasper Juinen/Bloomberg

Taoiseach Leo Varadkar was wise to give a cautious welcome to the British government’s time-limited plan to avoid a hard border between the Republic and Northern Ireland. The proposal leaves a lot to be desired, but it does represent “a step in the right direction”, as the Taoiseach remarked.

At last there is now something concrete from the British and that should enable the negotiations with the European Union to begin in earnest. The Taoiseach said it fell short of meeting Irish concerns for a permanent commitment to avoid a hard border on the island but was a welcome sign that the British government is getting serious.

The EU chief negotiator Michel Barnier took a more jaundiced view of the British decision to finally put forward a text and he questioned the time-limited nature of the proposal. He also expressed doubts about how a backstop arrangement to keep Northern Ireland in regulatory alignment with the EU could be applied to the whole of the UK as what was feasible for a territory the size of the North might not be feasible for the UK as a whole.

The questions raised by Varadkar and Barnier are pertinent but both men are right to regard the British proposal as a positive development regardless of its shortcomings. Considering where the British were a year ago, when prime minister Theresa May appeared intent on pursuing the hardest possible Brexit, it represents another small step in the retreat towards a common sense approach.

Varadkar should ignore pressure to reject the British proposal outright. Finding a compromise to deal with the Border problem is not going to be easy, and may not even be possible at the end of the day, but the Irish side has to explore every avenue. The UK is in its current mess because so many of its leading politicians got carried away by their own hardline rhetoric. If May is edging towards a compromise she needs to be encouraged rather than rebuffed.

The comments by foreign secretary Boris Johnson graphically illustrated the kind of pressures she faces. “It’s just beyond belief that we’re allowing the tail to wag the dog,” was his comment on the Irish backstop agreed last December. This casual dismissal of Irish concerns about the Border shows the danger this country will face if he succeeds in his ambition of replacing May as prime minister. The remarks, made at a private dinner, reveal the depths of his arrogance and ignorance as does his view that President Trump might get somewhere if he were in charge of the exit talks.

This insight into the foreign secretary’s thinking shows that there is a real prospect that the UK might opt for the hardest possible Brexit if May loses control of her cabinet. All the more reason to encourage her along the path of reason even if she still has a long way to go.