World View: British voters have been sold a dream, in the same way Trump peddled ‘Maga’ to the masses 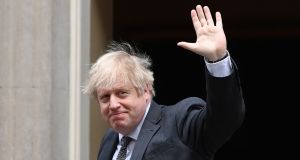 EU fish talks were always the worst: all-nighters, games of three-dimensional chess reconciling quotas, total allowable catches, “fishing effort”, mesh sizes, between 28 member states with conflicting interests. Not to mention the science of fish stocks. Usually only brought to agreement by a breaking dawn and the imminence of the Christmas holidays.

And to be followed invariably by 28 national narratives of historic “victories”, cutbacks mysteriously transformed into entirely notional gains.

British voters have been sold a pup, a dream, much in the way Trump did with his Make America Great Again

Last weekend as we watched Barnier and Co struggling through the Brexit talks’ final acts, once again tangled in fish nets, I remembered a story about the late Eamon Gallagher, former Irish diplomat and once the Commission’s Mr Fish. Many years ago Gallagher, I was told by former colleagues, in the early hours brokered a way through days and nights of deadlocked talks on divvying up North Atlantic stock by inventing a new fish species and then persuading the parties to distribute notional quotas in it, so placating the previously aggrieved. Deal done.

And, in truth, the Barnier team were demonstrating a similar creativity. Their task – successfully accomplished – to create the illusion that the EU was ceding something deeply precious to the UK, albeit deeply nebulous, a cloak like the Emperor’s new clothes that left its wearer barer than a newborn and as unprotected, “sovereignty”. A shibboleth, a word whose meaning conjures up romantic notions of independence, autonomy, robustness, and apartness, and of resistance against coercion, perhaps even tyranny. How can anyone be against sovereignty?

But, confused with “power”, British voters have been sold a pup, a dream, much in the way Trump did with his Make America Great Again (Maga). And they will begin to realise that the sovereign right to act autonomously is worth little without the power to do so. A power inevitably contingent in a world in which each nation’s security and economic wellbeing is inextricably connected to those of others.

The big lie is – the essence of Boris Johnson’s contention Britain will have its cake and eat it – that the sovereignty of the UK post-Brexit will be unconstrained. But unconstrained, in truth, only if the UK decides its fate lies in a North-Korean-style future, cut off from the rest of the world. “We have taken back control of laws and our destiny,” Johnson claims. “We have taken back control of every jot and tittle of our regulation in a way that is complete and unfettered.” Unfettered?

As former Irish diplomat Bobby McDonagh observed in these pages, “the UK can reach no meaningful trade deals that do not limit British sovereignty. National control over trade is a contradiction in terms. Absolute control over trade stops at Dover and Heathrow. There is only one way to achieve such control. Don’t export anything.”

The fetishising of sovereignty, code for going it alone and 'we were once an empire', is a cruel delusion

Indeed the crunch final issues in the Brexit trade deal, the level playing field and fish, illustrate the point perfectly. Britain sought the right in the name of sovereignty to disregard changes in standards within the single market that every member state would be obliged to enforce, the right in effect to be treated not equally to EU members, but better. In fisheries it sought the right to cut back historic fishing rights of neighbours without any consequences in terms of access to the markets of the union. Unconstrained sovereignty.

Johnson had previously insisted no prime minister should ever sign a deal that involves the stipulation: that “If [the EU passes] a new law in the future with which we in this country do not comply” the EU would have the “automatic right” to impose tariffs. But eventual acknowledgment by the UK that in both cases it would accept there would be a price to pay, mediated if necessary through independent arbitration, enabled the deal to be signed without jeopardising the single market. And Johnson’s bluster notwithstanding.

The fetishising of sovereignty, code for going it alone and “we were once an empire”, is a cruel delusion for which the UK will pay a heavy price.

Commission president Ursula von der Leyen put it well – real sovereignty is not the right but the ability to act, which Brexit diminishes. “We should cut through the soundbites and ask ourselves what sovereignty actually means in the 21st century,” she told reporters after the talks. “For me, it is about being able to seamlessly do work, travel, study and do business in 27 countries. It is about pooling our strength and speaking together in a world full of great powers. And in a time of crisis, it is about pulling each other up instead of trying to get back to your feet, alone. And the European Union shows how this works in practice.”

As Eamon might have said: “Mr Johnson, can I interest you in a quota of this unusual fish?”