The Irish Times view on the People’s Republic at 70: a revolution’s contradictions 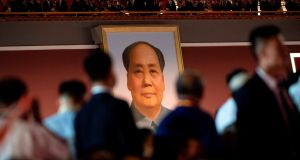 On the 70th anniversary of its communist revolution in 1949, China’s power challenges the existing Western-centred world order dominated by the United States. Photograph: Noel Celis/AFP/Getty Images

China’s emergence as a great power is the central fact of international relations in the 21st century. Its political, economic, military and cultural reach extends worldwide and especially to the Asian region. On the 70th anniversary of its communist revolution in 1949, China’s power challenges the existing Western-centred world order dominated by the United States. It presents an alternative authoritarian state capitalist model of society, based on major achievements in reducing poverty and enlarging opportunities for its own people.

The Chinese revolution and its subsequent phases break into major periods of socioeconomic and political developments. They are all based on its previous history as a great civilisational power over millennia, the leading Asian power alongside India, until European powers imposed their will and might on them and in China’s case the British humiliated its rulers through the Opium wars of the 19th century. That paved the way for decades of resistance, internal conflict and revolutionary events, culminating in the Japanese occupation of China in the 1930s and the Long March of Chinese communists led by Mao Tse-tung against them and the Chinese nationalists before their victory in 1949.

In the next 30 years China endured the “great leap forward” and the “cultural revolution”, during which millions died but social foundations of growing literacy, industrial and energy provision and extended life expectancy were laid down. Forty years ago Deng Xioaping’s policy of economic reform and opening up to the world were introduced. They have been spectacularly successful, but within the tragic political constraint laid down in June 1989 when thousands of students were killed in Beijing as their democratic rebellion was suppressed.

The current party leadership led by Xi Jinping since 2012 looks forward to China becoming a mature industrial and technological state by 2025 and a world power by 2049, the 100th anniversary of its revolution. Party leadership and its own distinctive model of development are primary features of this strategy, reinforced now by ruthless use of surveillance technology and determined pursuit of Xi’s Belt and Road initiative to connect China and Europe by land and sea.

These ambitions will be more difficult to achieve than they realise. Centralised control impedes the freedom to innovate and experiment economically and socially as well as politically. China faces huge challenges of inequality, climate breakdown and demography. The intense protest movement in Hong Kong exemplifies wide dissatisfactions. Repressive social engineering to Sinicise the Muslim Uigher population is unsustainable. Above all, how China relates to the US at global level will test its revolutionary heritage.