The Irish Times view on Austria’s leader: High on style, low on content 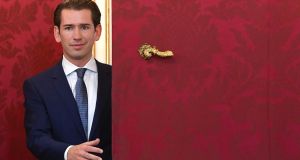 In politics, as in life, everyone loves a winner. And this week the winning Austrian conservative leader Sebastian Kurz is very much feeling the love. The 33-year-old romped home last Sunday with a decisive election win and at least three paths back to power. With manners as impeccable as his suits, and a campaign of effective political and digital messaging, he has shown how you win elections in 2019: focus on the personal brand.

Now Brand Kurz has completed its takeover-makeover of the People’s Party (ÖVP), replacing its traditional colour of black with eye-popping turquoise. In just two years as leader he has promised a new style of feel-good, content-free politics – and he has delivered.

In 2017, he walked out of Vienna’s grand coalition with the Social Democrats, a decades-old consensus model he said was strangling the country. After finishing first in the subsequent election, he went back to the future by renewing his party’s alliance with the far-right Freedom Party (FPÖ). Unlike 2000, there were no EU sanctions and Kurz set to work on balanced budgets, a pruned-back welfare state and even tougher immigration laws.

Sunday evening’s result was not just a gain for his party of 13 percentage points in two elections. It looked as if he had delivered, too, on another political trick: let political populists into power to shrivel in the daylight of realpolitik. The FPÖ, often Austria’s strongest party in polls, has slumped dramatically and faces an extended period of self-reflection in opposition. Its former leader may yet face prosecution over fiddled expenses and contracts-for-cash promises.

But 16 per cent of voters still backed them and, in many ways, the FPÖ has achieved its political objective: to shift Austria’s already conservative politics so far right that, when the FPÖ lead candidate warned in campaign television debates about the danger to Austria of a “Muslim culture”, no one raised an eyebrow, let alone a word of protest.

In power, Kurz tolerated the FPÖ’s power grab on the interior ministry and attempted politicisation of police and intelligence services. He dismissed as “one-off” missteps dozens of FPÖ provocations – including birthday greetings on Facebook for Hitler. For a return to power, Kurz has internalised the FPÖ’s fear-mongering and toxic immigration rhetoric by rebranding it Politik mit Hausverstand or “common sense politics”.

He has now sold that to Austrian voters but his likely coalition partner, the left-wing Greens, are not buying. They say their support depends on Kurz changing his spots twice over, to embrace credible climate change policy and drop incitement as immigration policy. Their message: in politics, as in life, impeccable suits and manners are no substitute for decency.