The Irish Times view on US troops in Syria: a cynical betrayal of the Kurds

With Trump’s short-sighted decision to withdraw soldiers from the north, the region is suddenly thrust back into strategic and geopolitical uncertainty 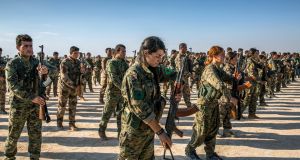 Kurdish fighters with the American-backed Syrian Democratic Forces in Hukumya, Syria, stand in formation during a funeral for comrades killed in fighting against the Islamic State in October 2017. Photograph: Ivor Prickett/The New York Times

President Donald Trump has engineered another disruptive turn in US foreign policy with his decision to withdraw troops from the strategic zone in northeastern Syria where they have helped Kurdish forces fight Islamic State and where most of the remaining Islamist prisoners from that war are held. His decision opens the way for the Turkish army to occupy the zone, thereby upsetting the delicate strategic balance in place since Islamic State was defeated. It is a cynical and short-sighted move regarded as a betrayal by US allies in the region and will be watched with trepidation by other US allies who depend on its policy consistencv.

Trump has long attacked US deployments in the Middle East as costly and dysfunctional, disregarding advice that they allowed it stand up to Russia, contain Iran, restrain Turkey, retain leverage on Arab states and prevent a resurgence of Islamic State. His decision last January to pull out US troops was reversed under pressure from senior advisers and anxious allies. That gave more time for US diplomats to explore how they can accomplish these objectives in a region heavily burdened with contending state and strategic interests. By pulling the plug like this, all that patient work is jeopardised.

The way is now open for Turkey to fill the vacuum, which Trump must know from his conversation with President Erdogan before he announced the decision. Turkey regards the zone as a proxy area for the Kurdish forces it is fighting and is determined to defeat.

Erdogan has prepared for this moment by linking up with Russia on arms supplies, disregarding pleas to attack the Al Qaeda enclave in northwestern Syria and by cultivating domestic nationalist and military support in pursuit of his authoritarian ambition in Turkey. He is reported ready to clear out parts of the so-called safety zone to return large numbers of the 3.5 million Syrian refugees now in Turkey.

Another malign effect concerns the tens of thousands of Islamic State fighters held captive in four camps by the Kurdish forces in the zone. Many are international, including those of European origin. Trump blames EU states for not taking them back and says the US has been paying over the odds for them. The Kurds have suddenly lost incentives to hold on to them, as they explore whether to make peace with President Bashar al-Assad to protect their interests.

Such multiple confusions once again return Syria to a conflict arena between regional and international powers. With a relatively small military commitment the US was able to hold the line pending a wider negotiation.

The region is suddenly thrust back into strategic and geopolitical uncertainty and insecurity. Trump’s transactional foreign policy has never looked so unreliable.

1 Passenger who promised driver a ‘few quid’ after crash awarded €10,000
2 Miriam Lord: Minister for Agriculture tries to get himself out of the manure
3 Barry Cowen tells Dáil he is profoundly sorry for ‘stupid’ drink driving offence
4 Driver whose car ‘rolled nine metres’ into front of other vehicle loses rear-ending claim
5 Coronavirus: One more death and 24 new cases reported in the Republic
Real news has value SUBSCRIBE