The Irish Times view on Kevin Lunney attack: Time for people to speak up 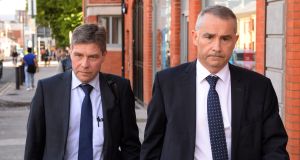 Kevin Lunney and his colleague Liam McCaffrey, pictured in Dublin in May this year. McCaffrey, chief executive of Quinn Industrial Holdings, was right to suggest that there are double standards at play in the response to the campaign of harassment and intimidation against the company’s executives. Photograph: Dara Mac Dónaill

The only thing necessary for the triumph of evil is for good men and women to do nothing. Co Cavan priest Oliver O’Reilly could have been channelling Edmund Burke when he called out the perpetrators of the depraved act of violence inflicted on Fermanagh businessman Kevin Lunney last month.

Fearful that someone would eventually be murdered in the campaign of intimidation against the industrial conglomerate lost by local businessman Sean Quinn, Fr O’Reilly felt compelled to speak out from the altar of Our Lady of Lourdes Church in Ballyconnell. He condemned the “Mafia-style group with its own godfather” and the “paymaster or paymasters” that financed this well-planned attack on the father of six. He also implored locals to break the Border omerta that is stopping more people from actively opposing the “cancer of evil” in their community.

Now, five weeks after the torture of Kevin Lunney and with no arrests over the incident, fellow executives at Quinn Industrial Holdings, like Fr O’Reilly, have put their heads above the parapet. Their fears stem not just from the apparent lack of progress in the investigation but the recurrence of minor incidents of intimidation, including the slashing of silage bales owned by Lunney’s brother Tony in a Fermanagh field.

The scale of the violence inflicted on Kevin Lunney was new and horrific, but the intimidation and vandalism is not. QIH executives over recent days have expressed concern that they felt “a little bit on our own” during the years of attacks which, one said, was dismissed as “those wild men along the Border at it again”.

The businessmen are concerned that the Lunney abduction will slip off the news agenda and out of the public’s mind, while the death threats against the directors, delivered while Lunney’s leg was being broken in two places and the initials “QIH” were being carved on his chest, remain. Tony Lunney’s emotional retelling of the attack on his brother on television this week brought home the savagery and effects of the assault.

Liam McCaffrey, chief executive of QIH, was right to suggest that there are double standards at play, speculating that if executives at Facebook, Google or Intel were subjected to the same campaign of intimidation, there would have been a “national outcry” about it. QIH is as important a company as those multinationals, employing 840 people on the Cavan-Fermanagh border, an area not known as a hub of enterprise.

Sean Quinn should reflect on his own role in this saga. He was wrong to use a television interview last week to criticise the same people who are living in fear of their lives at a time of heightened tensions in the community. He has condemned the attacks but given the nature of the violence against Kevin Lunney, Quinn’s former executives need his public support, not his criticism.