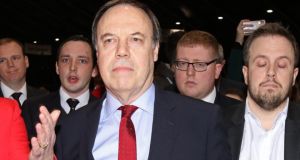 An unusually unpredictable Northern Ireland election returned surprising, heartening results. Though not for the DUP or even Sinn Féin, despite the latter’s success in unseating the DUP’s Westminster leader Nigel Dodds. Both big parties lost ground. The cheer is for Alliance, which took a seat the DUP coveted. For the third successive election the North’s fledgling centre ground showed well.

This fits with the other big electoral shift. Belfast, a majority Remainer city three of whose four seats had been held by Brexiteer DUP MPs, now has three nationalist representatives. For the first time, nationalists hold more seats than unionists in both Westminster and the non-sitting Assembly at Stormont. Cross-community Alliance can no longer be disregarded as do-gooders, mere makeweights. SDLP winners Colum Eastwood and Claire Hanna are stronger on the benefits of Europe than a united Ireland.

But it was disaster for the DUP that became the North’s main story once Boris Johnson’s big majority materialised. The Dodds defeat put a cruel full stop to unionist influence at Westminster. Dodds and ousted South Belfast MP Emma Little-Pengelly, visibly demoralised at the Belfast count, showed warmth in their hugs for the SDLP’s Hanna. No such rapport with Sinn Féin’s John Finucane, the first non-unionist to take the North Belfast seat; it was nonetheless a grace note after a bitter, at times ugly, election campaign.

The result leaves DUP leader Arlene Foster internally damaged and removes a figure, in Dodds, who was generally regarded as her equal in the party leadership team. Yet a year ago between them they rejected the Brexit negotiated by Theresa May. Johnson, whom they hailed as the stronger unionist, proposes a deal they say endangers the union. But business, farming and moderate unionists who voted for Hanna see it as less destructive than a dreaded “no deal”.

To many observers, it is the DUP’s strategic miscalculations that have put the future of the Union on the agenda. For the party, now is a time for fundamental reflection.