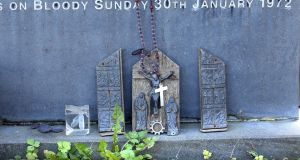 The Bloody Sunday memorial in the Bogside in Derry. Photograph: Margaret McLaughlin

The decision of the Prosecution Service of Northern Ireland to stand by its decision not to bring charges against 15 British soldiers for their actions on Bloody Sunday has come as a huge disappointment to the relatives of the 13 people killed in Derry on January 30th, 1972. It is a far cry from the welcome that greeted the public apology for the atrocity offered by then British prime minister David Cameron 10 years ago. Speaking in the House of Commons in 2010, Cameron said the findings of the Saville report were clear in describing the actions of the paratroopers on Bloody Sunday both “unjustified and unjustifiable”. He went on to say the British government was deeply sorry for what happened. “You don’t defend the army by defending the indefensible or hiding from the truth,” he said.

Cameron’s words gave real hope to relatives of the victims that the soldiers who participated in the events of that day would finally face justice. However, after a delay of nine years the Prosecution Service last year decided not to bring charges against 15 of the former soldiers at the centre of the inquiry but only against one of the participants, known as Soldier F. That decision has now been upheld after a review of all 16 cases.

Marianne O’Kane of the Prosecution Service, who carried out the review, said the available evidence was insufficient to provide a reasonable prospect of conviction against any of the 15 soldiers. The prosecution of Soldier F will go ahead as originally planned. Solicitors representing the victims are planning to bring judicial review proceedings to the High Court.

When the original decision was announced last year, Jean Hegarty, whose 17-year-old brother Kevin McElhinney was killed on Bloody Sunday, asked how the evidential test being required by the prosecution could be met when investigators did not collect any evidence on the day of the atrocity. While that is clearly an important stumbling block it is no consolation to the relatives who expected more after the definitive conclusions of a long-running inquiry and a public apology from the British government.

1 One hundred Irish retailers for all your online Christmas shopping
2 People who throw house parties can be fined €1,000 and jailed for up to a month under new proposals
3 School ordered to reopen after closing due to Covid-19 fears
4 Golf clubs waiting to hear if they can stay open under Level 5
5 Girl delivered early from terminally ill mother settles case for €900,000
Real news has value SUBSCRIBE