The Irish Times view on the European Parliament: the stakes are bigger than ever

Elections next May could be the most important in a generation 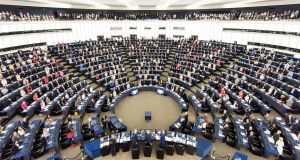 The European elections next May are shaping up to be the most important since direct elections to the Parliament began in 1979. Photograph: Patrick Seeger/EPA

The European elections next May are shaping up to be the most important since direct elections to the parliament began in 1979. With populist movements of various kinds on the march all over Europe there is a real chance that control of chamber could slip out of the hands of long-established parties.

Given that the parliament has steadily increased its powers over the past 40 years, dramatic changes in its composition could have profound consequences for the future of the European Union. Voters in most countries, including Ireland, have in the past not taken the European elections as seriously as national elections and have sent a variety of maverick parties and candidates to Strasbourg.

If the trend evident in national elections across the continent over the past two years is repeated in the European elections there is real possibility that the three big groupings – the centre-right European People’s Party, the centre left Socialists and the Liberal grouping Alde – could find themselves unable to control the parliament as they have done up to now.

The big parties have done themselves no favours with a decision by the parliament’s governing body not to reveal details of the monthly €4,416 “general expenditure allowance” paid to all MEPs to fund their constituency offices. The money is in many cases paid into personal accounts. Last week the European Court of Justice backed the parliament’s decision to reject requests by journalists to see how the MEPs are spending the money. It was accepted in this country some time ago that journalists and the public have the right to know the details of expenses being claimed by TDs. MEPs should be no different.

Ireland is set to gain two seats, going up from 11 to 13, due to the departure of the United Kingdom from the EU. The Government has accepted a boundary commission report which recommended that Dublin should gain one seat, making four seats, and the Ireland South constituency, extending from Wicklow to Kerry and from Waterford to Offaly, will also gain one to become a five seater. The Midlands-North-West constituency will lose the counties of Laois and Offaly to Ireland South and will remain a four seater. It stretches from Louth and Meath in the east to Galway and up to Donegal.

The changes will give Fianna Fáil an opportunity to win a seat in each of the three constituencies and reestablish a presence in the parliament. The party’s current MEP, Brian Crowley, has not been able to attend over the past five years due to illness and in any case he declined to join the Alde group. Fine Gael and Sinn Féin will be hoping to retain their current representation while Labour and the Greens will be trying to make a comeback at European level at the expense of Independents who currently hold three seats.