Far more is at stake here than one man’s career 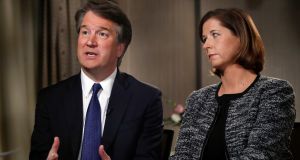 Nominees for the United States supreme court don’t normally make themselves available for television interviews in the middle of their confirmation process. So Brett Kavanaugh’s appearance, alongside his wife, on the conservative Fox network on Monday evening was a sign, as if it were needed, that his nomination is in deep trouble.

Two women have accused the appeals court judge of sexual misconduct. Christine Blasey Ford, a psychology professor in California, says Kavanaugh attacked her and tried to remove her clothing at a party when they were at school in the early 1980s. A second woman, Deborah Ramirez, has said he exposed himself to her during a party when they were at university. Kavanaugh has categorically denied the incidents ever happened and appealed for a fair hearing when he and Ford come before the Senate judiciary committee later this week.

He should get that fair hearing. By the same token, it’s essential that the allegations made by Ford and Ramirez are taken seriously and given the time and consideration they require. So far, the response from the White House and senior republicans – treating the allegations as a politically-motivated nuisance – has been reprehensible.

Far more than one man’s career is at stake here. If he makes it to the supreme court, Kavanaugh will be in a position to shape American life in profound ways for decades. Anyone aspiring to such power should have to meet a very high bar, and be subjected to the most robust confirmation process.

Strategically, the republicans have also badly miscalculated. Against a backdrop of the #MeToo movement, and just weeks before midterm elections, the party is again helping to energise the left and suppress turnout on their own side by alienating so many women. A Fox News poll in recent days showed a record number of voters oppose the nomination, with women showing greater disapproval than men. Sadly, it is those electoral – rather than moral – considerations that could ultimately scupper the nomination.