The Irish Times view on the UN General Assembly: battling for relevance

The institution’s problems go much deeper than Donald Trump, but the focus on the antics of the US president this week will exemplify the current malaise 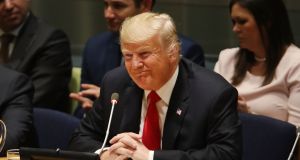 The moment with the greatest potential for fireworks is tomorrow’s meeting of the UN security council, which, owing to the rotating chairmanship, will be steered by Trump himself. Photograph: Spencer Platt/Getty Images

Some 133 heads of state and government will be in New York this week for the United Nations general assembly, but the enduring pulling-power of the annual gathering cannot conceal the UN’s struggle for relevance. The Trump administration’s repudiation of multilateralism, the rise of nationalism and the UN’s failures in Syria, Yemen and elsewhere have presented the body with arguably its biggest crisis since its foundation in the postwar years.

The institution’s problems go much deeper than Donald Trump, but the focus on the antics of the US president in Manhattan this week – and the consequent sidelining of important agenda items such as climate policy, poverty and gender equality – will exemplify the current malaise. Few, perhaps not even his aides, quite know what Trump will say in his address to the general assembly today. Last year, he threatened to “totally destroy” North Korea and mocked its leader, Kim Jong-un, as “Rocket Man”. Less than a year later, he performed a 180-degree turn by embracing reconciliation with Pyongyang.

In his approach to the UN itself, however, Trump has translated bluster into hard policy. On his watch, Washington has withdrawn from the UN’s human rights council and its education and culture agenda, Unesco. It has cut funding for peacekeeping operations, the Palestinian relief agency and the UN population fund. It has renounced the Paris climate accord, the Iran deal and the global migration pact. Trump’s ambassador to the UN, Nikki Haley, has been sidelined by the rise of national security adviser John Bolton, whose most recent intervention was a plan to destroy the International Criminal Court.

Expect the plight of the Palestinians, the Rohingya, the people of Yemen and many others to be overshadowed this week

The moment with the greatest potential for fireworks is tomorrow’s meeting of the security council, which, owing to the rotating chairmanship, will be steered by Trump himself. The US president has pushed for the meeting to be devoted to Iran, hoping to persuade other powers to impose swingeing new sanctions. That won’t happen. Indeed, far from underlining Trump’s leadership, the Iran discussion will only highlight his isolation. All the other permanent council members have deplored Trump’s decision to renounce the nuclear deal and have no appetite to humour him. The prospect of such an embarrassment for Trump explains why US officials have sought in recent days to broaden the agenda towards arms proliferation, diluting the focus on Tehran.

With the focus on Trump, and on the efforts of America’s allies to contain the damage flowing from his every word and gesture, expect the plight of the Palestinians, the Rohingya, the people of Yemen and many others to be overshadowed this week. Perhaps the leaders of China, Russia and India have already concluded that little of real significance will happen in New York this week. All three have opted to stay at home.

The Irish Times view on Seamus Woulfe: a question of judgment

1 Coronavirus: 442 new cases, 4 deaths as stricter house visitor limits introduced
2 Don’t use Google, don’t use work email, don’t hit ‘accept all’: how to fight for your privacy
3 Covid-19 infections from funeral led to a third of one restaurant’s staff self-isolating
4 Dr Tony Holohan expected to return to his post next week
5 Families of St John of God residents concerned over HSE takeover
Real news has value SUBSCRIBE