The Irish Times view on the bank guarantee: drawing lessons from the crash

While the pain and personal suffering caused by the crash should never be forgotten, it is important, too, to take encouragement from the recovery 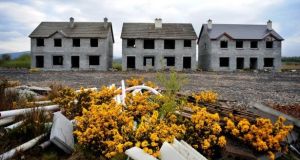 Ten years on from the fateful night of the bank guarantee, Ireland has come through a terrible economic crash followed by a strong recovery

Ten years on from the fateful night of the bank guarantee, Ireland has come through a terrible economic crash followed by a strong recovery. It is necessary to try and learn from both, while realising the huge cost of the collapse and its enduring legacy. Above all, we need to do whatever we can to ensure that we reduce exposure to future economic shocks and move the economy away from a cycle of boom and bust. Steady and solid growth has been a rarity in recent Irish economy history, but it needs to be the aim.

The crisis was so deep in part because it involved both the banks and the public finances. The two were linked, of course – the State ended up bailing out the banks at huge cost – but the combination of the two together made the eventual slide into the bailout inevitable. We did not know on the night of the guarantee the extent of the costs of bailing out the banks which would slowly become clear. Pushed into a corner, Government ministers signed up to the guarantee, on a night where even now some details remain fuzzy.

The story which emerged slowly afterwards of reckless bank lending and inefficient regulation could hardly have been more stark. Ireland’s banks were not sunk by exposure to exotic financial instruments, but rather by lending on the basis of assets which were hugely overvalued. We must hope that the lessons in terms of bank supervision and regulation have been learned, though it must be said that episodes such as the tracker mortgage debacle show ongoing flaws in banking culture.

Domestically, new mortgage lending rules and much more assertive regulation are in play. This is welcome. Still, rising house prices, the legacy of a collapse in building during the bust, show close vigilance remains essential, as well as pointing to wider social and economic problems. Internationally, supervision at EU level of the major banks is now a fact of life, though the promise at political level of finally breaking the link between banks and sovereigns has still not been fully met.

In terms of wider economic policy, we are also now under the control of EU budget rules, some now in our own domestic legislation. Again, this is important, constraining the ability of politicians to give away resources when they are available. Nonetheless, we are still borrowing to bridge the gap between revenue and spending. This should be ended in Budget 2019.

While the pain and personal suffering caused by the crash should never be forgotten, it is important, too, to take encouragement from the recovery. The rebound is faster than anyone could have expected and is most accurately reflected in rising employment. Using the resources created to solve the enduring problems in areas such as housing and health is now the key political challenge.

1 Seán O’Brien: Anger over my parents’ break-up has never left me
2 Why Waterford is ‘the best Covid county in Ireland’
3 Sinn Féin’s stand on Covid is facing increasing questions from political rivals
4 ‘In 2018 I wrote publicly about my heritage. Soon after, the anti-Semitic messages began’
5 Two hundred Irish retailers for all your online Christmas shopping
Real news has value SUBSCRIBE