The Irish Times view on the Ebola outbreak: WHO under scrutiny

There is a growing fear that, yet again, the WHO response has been too slow 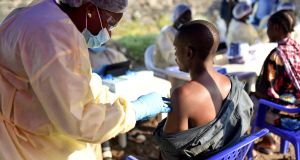 A Congolese health worker administers an Ebola vaccine to a man at the Himbi Health Centre in Goma, Democratic Republic of Congo. Photograph: Reuters

The outbreak of Ebola infection in the Democratic Republic of the Congo (DRC) is a year old this week and shows no signs of abating, despite intensive efforts and the use of a vaccine of proven efficacy.

The World Health Organisation (WHO) has just declared the outbreak a public health emergency of international concern. However there is a growing fear that, yet again, the WHO response has been too slow – mirroring criticisms of its handling of the last major outbreak in West Africa in 2014.

More than 1,700 people have died from the virus, making it the second biggest Ebola outbreak in recorded history. Cases have now reached Goma, a busy city on the Rwandan border. The latest WHO figures show a total of 2,612 reported cases, including 2,518 confirmed and 94 probable cases, of which 1,756 cases died, giving an overall mortality rate of 67 per cent.

Attempts to contain Ebola have been hampered by an ongoing conflict in eastern DRC. More than 40 health facilities have been attacked. There is also a lack of trust in authority.

It is fertile ground for rumours about the Ebola outbreak, including that international organisations are infecting people with the virus. And aid workers are commonly but erroneously believed to be harvesting organs from victims.

About a third of deaths are in the community – a sign that people do not trust health workers and are not seeking treatment, thereby spreading the disease to neighbours and relatives.

Recurrent and hard-to-control outbreaks of infectious diseases suggest we may be entering a new phase of high impact epidemics. The WHO’s Dr Michael Ryan said the world is “seeing a very worrying convergence of risks”.

These include climate change, emerging diseases, exploitation of the rainforest, large and highly mobile populations, weak governments and conflict. Which is all the more reason for the WHO to up its game.

An expert report into the 2014 West Africa outbreak referenced failures in judgment and leadership at WHO. The question must be asked: has the organisation addressed these issues?

1 Operator rejects claims by Dr Tony Holohan that car parks are full
2 BOI customers to be charged twice with bank fees on New Year’s Eve
3 Irish designer of Oxford vaccine: ‘I’ve never worked so hard in my life’
4 Coronavirus: No further deaths and 252 new cases reported, lowest daily figure since September
5 Somebody needs to explain sovereignty to Johnson before it is too late
Real news has value SUBSCRIBE