The Irish Times view on political scandal in France: claws out for a minister 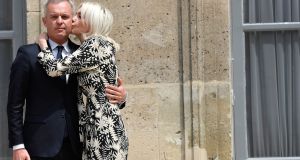 For Valéry Giscard d’Estaing, it was diamonds. For Roland Dumas, Berluti shoes. Now, into the annals of French political scandals goes François de Rugy, brought down by a lobster. Or, rather, lots of lobsters, on a silver platter, accompanied by €550-a-bottle Château Cheval-Blanc 2001.

France’s environment minister resigned this week after the slow-drip of allegations about lavish dinners he hosted while president of the National Assembly, starting with a camera-phone picture of those lobsters, made his current position untenable. The long-time ecologist said he was the victim of a “media lynching” and announced he would sue Mediapart, the investigative website that reported the stories.

De Rugy pointed out that he had been cleared by two investigations, one by the prime minister’s office, the other by the assembly. That was partly true. The assembly report found that “only three” of 12 dinners were ethically questionable. More difficult for Rugy was an allegation that he used a parliamentary allowance to pay his party dues.

Members of France’s ruling class enjoy an extravagant array of perks and privileges. The package for ministers includes a luxury car and driver, a state apartment, a quota of annual flights and first-class train travel. When his culture minister, Frédéric Mitterrand, came to work on his scooter, then president Nicolas Sarkozy reportedly mocked him and told him this was no way for a minister to behave.

On top of his salary, the head of state has his official residence at the Élysée, a personal chef, special hunting privileges and four lavish résidences secondaires, including the weekend retreat at Versailles, the seaside hideaway at Brégançon in Provence and the traditional summer residence, the Château de Rambouillet, south of the capital.

But these are different times. The gilets jaunes movement, while it has ebbed and splintered, revealed the intensity of public anger towards the political elite. A reckoning is under way. And in the age of the smartphone, that means a dinner-table selfie can bring down a minister.

1 One hundred Irish retailers for all your online Christmas shopping
2 Miriam Lord: All test and no trace makes Jack, and heaven knows who else, a very ill boy
3 What I learned about male desire in a sex-doll factory
4 Gym owner plans to defy restrictions and open
5 Des Bishop apologises to Traveller community for comments in interview
Real news has value SUBSCRIBE