The Irish Times view on Spanish politics: A missed opportunity 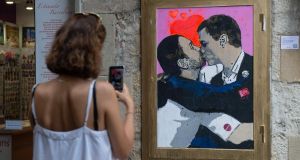 Future historians may wonder how two Spanish parties, purporting to share similar values, missed a unique opportunity to form a stable coalition government last week. The failure of the centre-left Socialist Party (PSOE) leader, Pedro Sánchez, and his counterpart in the more radical leftist Podemos Unidos, Pablo Iglesias, to reach agreement, has caused immense frustration among their voters. It has also exacerbated a dangerous irritation with mainstream politics among the broader Spanish public. This could benefit the right-wing populist forces that have surged rapidly across the country recently.

Parliament’s refusal to ratify Sánchez as prime minister last Thursday raises the spectre of new elections in November, when an increasingly extreme right might well come to power. PSOE-Podemos negotiations were never going to be easy but many Spaniards are asking why serious talks were delayed for so long, and then handled with breath-taking ineptitude by both sides.

Sánchez had emerged from late April elections as the clear winner, well ahead of the PSOE’s historic rival, the right-wing Partido Popular (PP). But he was still far short of a majority. Yet serious coalition negotiations, such as they were, only started days before Sánchez finally sought investiture as prime minister last week.

Sánchez may come to regret not engaging fully with Podemos

The PSOE had two partnership options, in theory. Ciudadanos (Cs) now occupies much of the centre-right space previously occupied exclusively by the PP. If Cs had remained true to its original centrist aspirations, it could have joined the PSOE in the kind of transversal political marriage typical of many EU governments. However, Cs leader Albert Rivera has moved the party ever further to the right, flirting with the rhetoric used by the quasi-fascist Vox, now in parliament for the first time. He accused Sánchez of ‘treason’ because of the PSOE’s (very tentative) overtures to Catalan nationalists, though Sánchez has ruled out any self-determination referendum.

And indeed, this was one of the issues which made Sánchez take the controversial step of vetoing Iglesias from personally entering any coalition government; the Podemos leader supports such a plebiscite. Starting negotiations with a veto was not helpful. To his credit, Iglesias stepped aside at the last minute, but even then the two parties indulged in megaphone diplomacy, treating each other more as enemies than potential partners throughout the parliamentary debate.

There may be one further chance to elect a prime minister in September, to avert an autumn poll the public does not want. On Friday, the PSOE appeared to burn all bridges with Podemos, instead appealing to the main right-wing parties to abstain next time, in the interests of stability. Despite some positive noises from the PP, that appears to be a very slim hope. Sánchez may come to regret not engaging fully with Podemos.

1 Brendan Gleeson as Donald Trump: ‘A mediocre impression and possibly a great performance’
2 Aer Lingus staff say they are living in ‘near poverty’ and unable to cover rent
3 Focus on cross-border movement as Donegal prepares for Level 3 restrictions
4 North Korea regrets killing South Korean ‘to control coronavirus’
5 Séamus Woulfe: The last man standing in Golfgate is set to learn his fate
Real news has value SUBSCRIBE