The Irish Times view on Covid-19 in the United States: a colossal failure 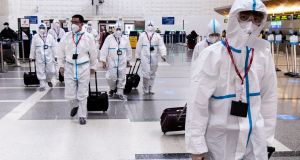 Across Europe, where many countries are emerging from circuit-breaker lockdowns, coronavirus infections are trending downwards. France, where daily cases had passed 50,000 at the end of October, has brought that number to around 10,000. Belgium, having had the worst infection rate in Europe, now has the fifth lowest rate on the continent. None of this is to say that the virus is in retreat – it is spreading aggressively, and in some countries hospitalisation rates and deaths are exceeding those seen during the first wave in the Spring. Yet the overall picture tells of progress being made.

Contrast that with the alarming scenes unfolding across the United States, which at one stage in the autumn appeared to be doing better than Europe at controlling the disease. The number of Covid-19 patients in hospital in the US passed the 100,000 threshold for the first time last week, and the daily case count is now above 220,000. Whereas previous spikes were characterised by regional clusters, now they are occurring everywhere simultaneously. More than 2,500 people are dying of the disease in the US every day.

That’s a colossal, unthinkable death toll. It should be prompting public fury, or at the very least bringing home the scale of the political failure that has made America’s crisis so much worse than it needed to be. Unfortunately, the country’s response has become a partisan political issue. Europe is asserting itself over the disease through draconian action that, while costly, is demonstrably effective. In the US, where President Donald Trump is openly dismissive of attempts to control the virus, public health officials continue to call on people to adhere to the most basic guidelines, such as mask-wearing, often in vain.

The Biden administration will take a more serious, informed and science-led approach to the battle, and millions of vaccines will begin to be distributed within days or weeks. But letting the virus rip, as the country is currently doing, could result in more than 500,000 deaths by next April, by some estimates – a devastating legacy that no country should be willing to countenance.