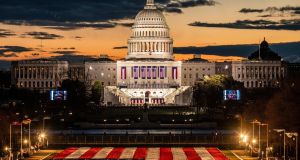 US president Joe Biden may hope to restore calm, but his term will be defined by unprecedented tumult. Photograph: Jason Andrew/The New York Times

For a majority of Americans, and so many others across the world, a great weight has been lifted with the coming to power of Joe Biden. After the exhausting, cruel and chaotic presidency of Donald Trump, under whom racism and misogyny were not only tolerated but indulged and on whose watch the United States saw its moral standing degrade further with every passing day, the world’s most powerful country is once again led by a serious-minded, decent man intent on restoring leadership at home and abroad.

Just as Trump’s inaugural speech in 2017, setting out a dark vision of “American carnage”, set the tone for his destructive presidency, Biden’s appeal for unity and healing laid down his chief objective. In any other year, a call for common purpose would sound like boilerplate rhetoric from a new head of state. Coming two weeks after a violent attack on the US Capitol, and spoken to a dangerously divided public that can barely agree on basic facts, it was imbued with real urgency.

Biden may hope to restore calm, but his term will be defined by unprecedented tumult. At the age of 78, after a long career that not long ago appeared to be in its twilight, he now faces a greater set of challenges than nearly all his modern-day predecessors. The US is in the grip of an unchecked, mismanaged pandemic that has already killed more than 400,000 people.

Ten million more have lost their jobs, the economy is on the floor, the climate is in crisis and American liberal democracy is in real peril. A third of the population believes the lie that Biden “stole” the election, and a crisis of domestic right-wing radicalisation has left the Congress in a state of perpetual logjam.

With a flurry of executive orders, including one that recommits the US to the Paris climate accord, Biden has begun to reverse some of Trump’s more egregiously misguided decisions. But other parts of the reality TV star’s legacy will be more difficult, if not impossible, to dismantle. Trump himself may be out of sight and absent from Twitter, but the 70 million people who voted for him are going nowhere and his standing among the Republican base gives him unparalleled influence in the party.

As Biden must know, there is a danger in welcoming a return to “normality” in Washington when it was precisely that normality that helped produce Trump in the first place.

Biden himself is a pragmatist, a deal-maker who seeks out the centre and relishes the messy business of coalition-building. After the Trump years, a boring presidency would be a luxury of sorts. But it’s a luxury neither America nor the world can afford. Biden may be an unlikely radical, but as he faces into what he calls the “cascading crises of our era”, he may yet find that circumstances thrust radicalism upon him.

5 Megan Nolan: At 15, I betrayed my boyfriend under the influence of the little alcohol it took