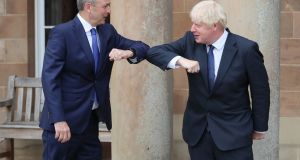 Ireland’s relations with the United Kingdom involve fundamental values and interests expressed through changing events that require enduring institutions and trust to manage them well. These various webs between the two states and peoples overlap deeply in Northern Ireland and are strained and challenged by Brexit. As Taoiseach Micheál Martin said in a speech on Irish foreign policy, “we must not become strangers because we miss the deep daily connections we had in the European Union”.

Martin is pledged to restructure relations and believes he has the support of prime minister Boris Johnson. That is an urgent task which must recognise the real difficulties involved. Alongside the great asymmetries of geographical scale, political power and economic wealth that characterise British-Irish relations there are now contested values and diverging interests arising directly from Brexit. Pooled economic, environmental, regulatory and health decision-making in the EU find support in one government and are opposed by the other. Transport, trade and customs links are severed and cannot remain as before.

Northern Ireland’s hybrid position between the UK and the EU will continue to aggravate relations even as it opens up new opportunities.

Recognising these realities should be the first step in restoring the political trust lost between the two governments during the Brexit talks. These were conducted between Brussels and London, not bilaterally between national capitals as the British preferred. Ireland emerged stronger from this multilateral outcome and can now play a constructive role as the UK resets its own international relations with the EU and the new Biden administration in the US. This will be tricky, since there will be pressures to use Northern Ireland as a pawn either way when the two states diverge in their policy-making values and interests.

Institutions matter in periods of change and strain. Both states and peoples are fortunate to have those crafted in the 1998 Belfast Agreement, now legally reinforced by the UK’s withdrawal agreement from the EU and its Northern Ireland Protocol. Last year’s re-establishment of the power-sharing executive in Belfast also reactivated the North-South Ministerial Council and reanimated the British-Irish Council which brings the participating governments together regularly.

Less attention has been paid to the British-Irish Intergovernmental Conference. It deals with non-devolved matters between Dublin and London and is the obvious place to negotiate the many contentious and organisational issues arising from Brexit not covered by the Protocol.

It can also handle difficult political issues concerning Northern Ireland. It should be renewed to meet regularly and be the primary locus for closer links between top politicians, ministers and civil servants in Dublin and London.