Controversy over Brian Stanley’s tweets has brought the public face to face with some uncomfortable truths about Sinn Féin’s present, and its past 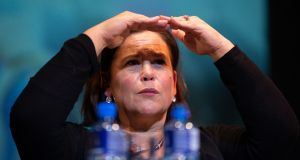 It has been a difficult week for Sinn Féin, and for its leader Mary Lou McDonald. Photograph: Tom Honan

It has been a difficult week for Sinn Féin, and for its leader Mary Lou McDonald. The controversy surrounding the tweets of Brian Stanley has not yet abated, but it has already brought the public face to face with some uncomfortable truths about Sinn Féin’s present, and its past.

Stanley’s tweet about Kilmichael and Warrenpoint was immediately condemned by his opponents and was soon retracted by the TD, who apologised. He was criticised by party colleagues for his tone and the manner in which he expressed himself – but the party did not, and will not, retract the sentiment which gave rise to the ill-judged tweet.

Simply put, the party believes that the 25-year campaign of violence by the Provisional IRA, mostly in Northern Ireland but also extending to this jurisdiction, Britain and beyond was justified and worthy of support. This is not a politically advantageous subject for Sinn Féin, however, so it is not one the party wishes to dwell on. Best to issue a woolly apology, it seems, and try to move on.

But on this occasion, things did not move on. Further scrutiny of Stanley’s past statements unearthed a 2017 tweet in which he appears to make reference to the sexuality of the then Taoiseach. The homophobic undertone of Stanley’s tweet became a bigger political problem for Sinn Féin. There was criticism from some young activists, two of whom resigned. One of the activists, a UCD student, was visited at her home by a party official to persuade her to withdraw her criticisms and desist in future.

The episode is not yet concluded. Stanley has been told by McDonald to take a week off – a nice contrast to Sinn Féin’s demands of its opponents for immediate answers – and to make a statement in the Dáil next week. But already it illustrates that the influx of new members into the party will not automatically bow to the military discipline of their forebears.

The controversy also reminds us of Sinn Féin’s entirely partial and self-serving view of Irish history. It claims to be the heir of the original Sinn Féin founded by Arthur Griffith in 1905, just as it claims, on behalf of the Provisional IRA, the mantle of the IRA of the War of Independence. This is just flat-out wrong. For one thing, the struggle for independence 100 years ago, in its violent and non-violent manifestations, enjoyed widespread support.

The campaign of the Provisional IRA most assuredly did not. It was repeatedly, and by large majorities, rejected in the Republic and in Northern Ireland.

It is useful that everyone, Sinn Féin included, be reminded of this from time to time – not least because Sinn Féin is engaged in a campaign to make us all forget this central, vital fact about our history.