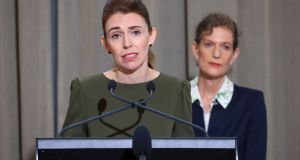 Prime minister Jacinda Ardern promises to implement all 44 recommendations in the report into the terrorist attack in on Christchurch mosques. Photograph: Hagen Hopkins/Getty Images

An understanding across the West over the last decade that domestic terrorism is not simply an external importation of Islamist fundamentalism has tragically not been translated into a reorientation of our defences. Home-grown Islamist and far-right fanaticism are as deadly and more difficult to counter, not least because the newer understanding of terrorism has not been matched by a corresponding broadening of the remit of intelligence agencies. The radar has remained focused in one direction.

That lesson has been starkly spelled out in a 792-page report from a New Zealand royal commission into the country’s worst mass shooting, the March 2019 massacre by lone, white supremacist Brenton Tarrant. Fifty-one worshippers died during prayers at two mosques in Christchurch, the massacre livestreamed on Facebook.

The report found security agencies “almost exclusively” focused on the threat from Islamist terrorism at the time, but insisted that there was “no plausible way” his plans could have been detected by government agencies “except by chance”. It was a point that did not go down well with victims’ families but was echoed by prime minister Jacinda Ardern in her apology. She promises to implement all the report’s 44 recommendations.

Among other issues raised was the laxity of firearms licensing. Within a month of the attacks, Ardern passed laws outlawing all the military-style weapons that Tarrant had amassed.

Tarrant, now serving life for the attack, is a socially anxious loner radicalised partly by extremist content on YouTube. He posted multiple troubling references online and traveled abroad extensively to places linked to far-right violence. He collected weapons, ammunition, tactical gear and unprescribed steroids. And although treated in hospital after a firearms accident in his home, he never came to the attention of the authorities.

Victims’ families have warned of an unconscious bias within the security services which meant that multiple alarm bells were simply not heard because Tarrant was white. It is a lesson none of us can afford to ignore.