The Irish Times view on Sinn Féin and An Garda Síochána: An ill-judged intervention 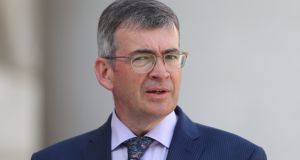 Sources in Northern Ireland have praised the positive contribution made by incoming Garda commissioner Drew Harris in the transformation of the RUC into an impartial police force that is now supported by the nationalist community. Photograph: Niall Carson/PA Wire

The selection of PSNI Deputy Chief Constable Drew Harris as the best candidate to lead a reform programme within the Garda Síochána came as a shock to senior officers. However, there was broad consensus within the force and the political system around his ability and his impartiality. The exception was Sinn Féin, whose party leader Mary Lou McDonald demanded reassurance that he did not subscribe to “the toxic policing culture that necessitated the disbandment of the RUC”.

This antagonistic Dáil intervention, 20 years on from the Patten commission and the disbandment of the RUC, reflects long-standing suspicion towards Harris from Sinn Féin in Northern Ireland, in part because of more recent investigations involving Gerry Adams. The party withdrew from the selection panel that appointed him as deputy chief constable.

Perhaps McDonald was attempting to soothe her predecessor. Whatever the reason, her intervention, as leader of the third-largest party in the State, was badly judged. There is universal acceptance, following a succession of damaging scandals, that Garda restructuring and reform is urgently required. Following an international competition, Harris was identified by an experienced panel as best qualified to lead that process.

By placing questions over the appointment on such dubious grounds, McDonald has offered those opposed to her party within both Fianna Fáil and Fine Gael – her reluctant potential partners in government – a further reason for questioning Sinn Féin’s commitment to democratic principles and transparent law enforcement.

Harris has been widely praised in Northern Ireland for his positive contribution to the transformation of the RUC into a police force that is now supported by the nationalist community. His father, also an RUC officer, was killed in an IRA car bomb attack in 1989. His personal resilience and commitment to high ethical standards will be vital in attempting to bring change to An Garda Síochána. There should be no attempt to undermine him.

1 Dublin gangland figures involved in Drogheda feud that killed 17-year-old
2 Murdered and mutilated: Keane Mulready-Woods and the teenagers of gangland
3 Mary Lou has to call for the smelling salts as SF councillor deals a knock-out blow
4 Who was murdered teenager Keane Mulready-Woods?
5 Patrick Freyne: The mystery of Dermot Bannon and his many surrogate wives
Real news has value SUBSCRIBE