The Irish Times view on sexual abuse of nuns: Church must address reality

The pattern is clear: Rome’s instinct in these cases is to minimise 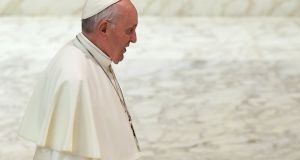 The public acknowledgement by Pope Francis that nuns have been sexually abused by priests and bishops, is a welcome advance where that issue is concerned. Photograph: Tiziana Fabi/AFP/Getty Images

Pope Francis has taken two significant steps on the issue of sexual abuse in the past week. One was the decision to expel former US cardinal Theodore McCarrick from the priesthood after the Vatican found him guilty of sexually abusing minors.

The other was the pope’s public acknowledgment that nuns have been sexually abused by priests and bishops.

That acknowledgment followed reporters’ questions about the resignation last month of Fr Hermann Geissler, chief of staff at the Vatican’s Congregation for the Doctrine of the Faith, which has responsibility for dealing with sexual abuse cases involving clergy.

The priest was accused by a former nun of making sexual advances to her in confession. He denies this.

Also, earlier this month, Vatican magazine Women Church World carried an article which said clerical sexual abuse of nuns led to “the scandal of imposed abortions and children not recognised by priests”. Further, over recent years nuns in India, Africa, Latin America, and Italy have accused priests of sexual abuse.

Pope Francis said such abuse of nuns was a continuing problem and he recalled how Pope Benedict XVI had dissolved an order of nuns “because a certain slavery of women had crept in”.

This was a reference to the French Contemplative Sisters of Saint-Jean, dissolved in 2013 following allegations against founder Fr Marie-Dominique Phillippe, who died in 2006.

As with clerical child sexual abuse, Rome has been slow to acknowledge the clerical sexual abuse of nuns. Yet it is not as if it was unaware. In 1994 the late Sr Maura O’Donoghue of the Medical Missionaries of Mary sent an extensive report to Rome about sexual abuse of nuns by priests in 22 countries, including Ireland. Its details emerged publicly in 2001.

Then Vatican spokesman Dr Joaquin Navarro-Valls acknowledged “the problem is known about” but insisted it was “restricted to a certain geographical area” (this was understood to be a reference to Africa).

Reports of clerical child sexual abuse first emerged in the US diocese of Louisiana in 1984.

In 2002, Cardinal Darío Castrillón Hoyos, then head of Rome’s Congregation for the Clergy, pointed out that most of the questions put to him on clerical child sex abuse were in English. This was, in itself, “an X-ray of the problem”, he said, suggesting it too was restricted, this time to the English-speaking world.

The pattern is clear. Rome’s instinct in such instances is to minimise. Later this week a major Vatican gathering will address the issue of child safeguarding in the Church worldwide, 35 years after those first clerical child sexual abuse cases emerged in the US.

It is 25 years since Sr Maura O’Donoghue alerted the Vatican to extensive sexual abuse of nuns by priests. It should not take Rome another 10 years to address that issue.