The Irish Times view on the murder of Jamal Khashoggi: time to punish the Saudi regime

Four months after the killing of the dissident journalist, we are no closer to seeing those responsible brought to justice

December 2nd, 2018: At the G20 summit in Argentina the focus was on crown prince of Saudi Arabia Mohammed bin Salman, as controversy over the murder of Saudi journalist Jamal Khashoggi clouded the event. 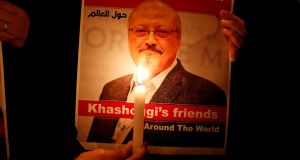 A demonstrator holds a poster with a picture of Saudi journalist Jamal Khashoggi outside the Saudi consulate in Istanbul last October. Photograph: Osman Orsal/Reuters

More than four months after the brutal killing of the journalist Jamal Khashoggi in the Saudi consulate in Istanbul, we are no closer to seeing his killers brought to justice. The regime in Riyadh, widely suspected of involvement in the killing, has suffered international rebukes but no meaningful sanctions even as it continues to stymie investigations into the murder.

Saudi Arabia initially denied any knowledge of Khashoggi’s disappearance after the dissident, a one-time ally of key figures in the ruling family, disappeared after entering the diplomatic mission to collect some paperwork. Under international pressure, and with the steady release of incriminating evidence, the monarchy then admitted that a team killed him inside the building but described it as a rogue operation that did not involve crown prince Mohammed bin Salman, the kingdom’s de facto leader. Riyadh says five people face the death penalty over the killing, though it has refused to name them.

Last week, a United Nations-led inquiry into the murder said evidence pointed to a brutal crime – Khashoggi’s body was dismembered with a bone saw – “planned and perpetrated” by Saudi officials. It added that the Saudis had “seriously undermined” and delayed Turkey’s investigation. Turkish president Recep Tayyip Erdogan went further, saying the killing was ordered at the highest levels of Saudi leadership.

Trump has been quite open about the reasons for his inaction. For him, Saudi money, oil and political support in the Middle East are more important than justice

Riyadh evidently assumed the storm would pass and that it the crown prince could ride it out. It’s vital that that doesn’t happen. But it’s clear that, even as the circumstantial evidence grows stronger, the White House – the actor with most leverage over the Saudi monarchy – is disinclined to act. Last Friday was the deadline by which the Trump administration was to report to Congress on who it believed was responsible for the murder, and whether it intended to impose sanctions.

The deadline was missed without explanation. Just a day before that, the New York Times, citing interceptions by US spy agencies, reported that bin Salman had said a year before Khashoggi’s death that he would use “a bullet” on Khashoggi if he did not return home and cease his criticism of the government. The CIA previously concluded that the crown prince ordered the killing.

Trump has been quite open about the reasons for his inaction. For him, Saudi money, oil and political support in the Middle East are more important than justice. That makes it all the more important for Congress to act – by demanding full disclosure of CIA records on the killing and forcing sanctions on those responsible. The UN inquiry must receive support from Turkey, Saudi Arabia and the US, and America’s allies – including Ireland – should keep up pressure on Washington to punish those responsible for the barbaric murder.