Whatever happens in the next few months, political leaders will have to work at ensuring good relations between the two countries are maintained 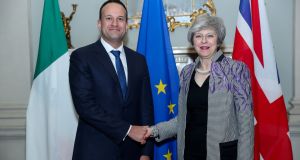 Politicians and others in positions of responsibility should heed the wise words of President Higgins, who has cautioned all of those involved in the Brexit process about the need for patience and warned against the use of emotive language. The President was speaking during a three-day visit to Britain this week.

At an event at Liverpool University, which has close links with Ireland, he said that Brexit’s critics as well as its advocates should choose their words carefully as there was no benefit to anybody in a coarsening of political language or the encouragement of ancient atavism.

The President made it clear that he regretted the decision of the United Kingdom to leave the European Union, and the lack of information that characterised the referendum campaign, but his cautionary words were directed at an Irish audience as well as a British one.

It is vitally important that whatever political tensions are generated by the complex and chaotic Brexit process should not be allowed do lasting damage to the relationship between the Republic the UK. That relationship was soured for far too long by the promotion of bitter political divisions which did nothing for either country.

The emergence of close neighbourly relations in recent decades has been a truly positive development for which politicians and officials from both countries deserve credit. It would be a tragedy if it was jeopardised by political point scoring over Brexit.

It is not simply that the EU promoted a peaceful settlement in Northern Ireland and provided financial resources to support it. Equally important was the fact that Irish and British politicians and their senior officials worked together at EU level in pursuit of common interests. The contacts made and developed in Brussels fed into the process that led to the Belfast Agreement.

After Brexit that routine contact will be no more and, while politicians from both countries will still have reasons to encounter each other, the close ties that have developed between senior officials will come to an end. That is why there is an onus on both governments to engage far more seriously with the work of the British-Irish Intergovernmental Conference and the other East-West and North-South institutions to ensure that the close relationship does not wither and die. It is also a good reason why politicians in both countries should weigh their words carefully over Brexit.