The Irish Times view on Spain’s woes: one step closer to an election

This week has seen the collapse of what may have been the best hope, in a long time, for a resolution of Spain’s economic and territorial problems 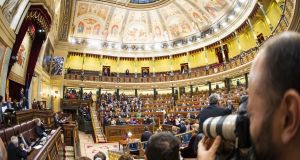 Like many crises in today’s Europe, Spain’s acute political woes derive from the failure of traditional conservative and centre-left parties to protect many of their voters from the brutal consequences of the 2008 financial crisis.

Millions of voters abandoned the Socialist Party (PSOE) for a new leftist grouping, Podemos. Millions more left the conservative Partido Popular (PP), disgusted by its corruption, to establish Ciudadanos, a new centre-right party. These developments might have resulted in a healthy opening up of Spain’s two-party system. But the situation has been complicated by the radicalisation of Catalan nationalism into a determined independence movement, and the re-emergence, in reaction, of overtly far-right Spanish nationalist forces.

The Catalan independence movement grew exponentially, as nationalists in Barcelona found more modest aspirations for the region repeatedly blocked by the PP. In doing so, the conservatives unleashed the genie of Spanish nationalism to shore up their declining support. But Ciudadanos, and even some sectors of the PSOE, also wrapped themselves in the Spanish flag. The genie then took sinister autonomous form in the far-right Vox party, which did well in recent Andalusian elections.

The conflict became critical in 2017, when the Catalans recklessly proceeded with an illegal independence referendum. The then PP prime minister, Mariano Rajoy, responded with his now notorious deployment of riot police, forcefully preventing people from participating in a peaceful, if legally dubious, civic act. These events have led to a dozen Catalan leaders being tried in Madrid this week, on draconian charges ranging from sedition and rebellion to criminal organisation. Such passions have now been aroused, on all sides, that it is hard to imagine a good outcome to this trial, for Spain or for Catalonia.

And this week has also seen the collapse of what may have been the best hope, in a long time, for a resolution of Spain’s economic and territorial problems. Last June, Rajoy was ousted in a confidence vote by the reform-minded PSOE leader, Pedro Sánchez. The new minority prime minister has hung onto power by offering dialogue – but not self-determination – to the Catalan nationalists, and major social reforms to the Left. Last weekend, Ciudadanos and the PP joined Vox in major street demonstrations that accused Sánchez of “high treason” for even talking to the Catalan nationalists. Yesterday, the Catalans joined their conservative arch-enemies to vote down Sánchez’s budget, because he will not entertain their demand for self-determination.

This vote will almost certainly precipitate elections, at a moment of maximum instability, with a polarising politicised trial in the news every day.