The Irish Times view on gridlock in Dublin: going nowhere

Far too many commuters drive to and from their workplaces, even from areas that are well served by public transport 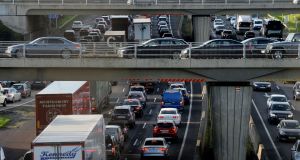 Motorists in Dublin spend a total of 246 hours – more than 10 full days – in their cars, travelling at an average speed of less than 10 km per hour at peak times, according to new research. Photograph: Alan Betson / The Irish Times

This week, Dublin scored highly in two international charts – one for the most liveable cities in the world and the other for chronic traffic congestion. Whatever about the high ranking for liveability, which seems almost incredible given the scale and depth of our housing emergency, there is no doubt that getting around Dublin has become more difficult and frustrating now that the Irish economy is nearing full employment once again. Only Bogotá and Rome are worse, according to a study of more than 200 cities worldwide published by Inrix, a motor data company.

It found that motorists in Dublin spent a total of 246 hours last year – more than 10 full days – in their cars, travelling at an average speed of less than 10 km per hour at peak times. The inner city is heavily congested by increasing volumes of traffic, as is the M50 motorway and every arterial road linking it with the centre. And this has happened despite improvements in public transport, notably linking up the two Luas light rail lines and the introduction of real-time passenger information for users of Dublin Bus services. Restrictions on traffic using the Liffey quays may be a contributory factor.

Yet it is significant that Conor Faughnan of the Automobile Association did not react to the abysmal Inrix ranking by calling for more roads to relieve congestion. Instead, he said money would have to be invested in public transport and cycling facilities as well as making better use of land for urban development. Faughnan is right. There are simply far too many commuters driving to and from their workplaces, even from areas that are well served by public transport, notably the inner suburbs.

Part of the reason for this relates to the continuing availability of free off-street car parking spaces in the city centre, particularly for public servants. If the users of such valuable spaces had to pay a benefit-in-kind tax or daily parking charges at the going rate, they might think twice about taking their cars into town. There should be no free riders.

1 Trump refuses to commit to peaceful transfer of power if he loses election
2 Swedish expert backtracks on herd immunity for Ireland
3 Five lessons I learned preparing my house for sale
4 Dr Martin Feeley: Young and healthy majority need to be allowed to live
5 'The next 10 days are critical' - NPHET warns young people are ending up in ICU
Real news has value SUBSCRIBE