The Irish Times view on population trends: Better off, but less healthy 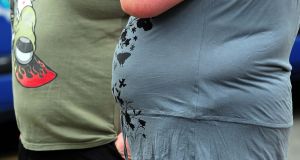 Three out of five people in Ireland are either overweight or obese. Photograph: Rui Vieira/PA Wire

Significant progress has been made during the past five years in reducing the number of people experiencing consistent poverty, according to the Central Statistics Office. The percentage of those affected fell from nine per cent during the depths of the recession to 6.7 per cent last year. Those most at risk tend to be single and disabled parents and their children and they deserve better. Ten years ago, because of targeted interventions, the consistent poverty rate was cut to 4.2 per cent.

With record numbers at work and the economy growing strongly, special efforts are required to address social deprivation. Last month, while welcoming the fact that 25,000 children had been lifted out of consistent poverty during 2017, St Vincent de Paul identified rapidly rising rents and supplementary payments to landlords as major problems, because of parents’ fear of losing their homes. With new powers, the Residential Tenancies Board should take a more assertive approach to rent controls.

Statistics are cold things. They tend to disguise flesh and blood individuals and the distress that may lie behind the figures. They are, however, essential planning tools for any government as they provide measurements of economic development; advance notice of emerging problems and evidence of the success or failure of social initiatives. This CSO report has been largely positive, charting a rise in the numbers at work, in earnings and in household disposable income. But warning flags have also been raised.

A population bulge has been working its way through the education system during the past five years, with student numbers rising by 40,000 at primary level and by 20,000 at both secondary and third levels. That will require additional teachers and new facilities. Our eating and drinking habits impact negatively on health services and government funding. Two out of five adults binge drink on a regular basis while three out of five are either overweight or obese. Dealing with these health issues would free up resources for use elsewhere.