The Irish Times view on litter: the need to step up 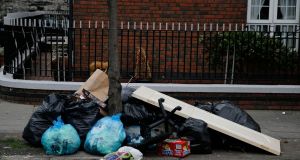 Disadvantaged areas are most likely to be affected by the litter problem, and they require particular and on-going encouragement and attention from council officials. Photograph: Nick Bradshaw

We should celebrate the progress made by most communities and local authorities in making towns and cities clean and attractive places. It instils a sense of local pride and shows what can be done through local encouragement and official activism. The opposite exposes apathy and mismanagement.

Irish Business Against Litter (Ibal) has been a major influence in encouraging local authorities to maintain litter-free streets by compiling lists of the best-kept and most littered areas. Naming and shaming in this way prompted town and city councils to become more active in maintaining standards, even as they withdrew from domestic waste disposal.

Results published this week from the final Ibal survey for 2018, carried out by An Taisce, led to Fermoy being adjudged the cleanest town, followed by Athlone, Kilkenny, Naas and Navan. Waterford city was the cleanest city. Many of the 40 centres surveyed were cleaner than the European average, an important achievement in tourism terms. But the failures were galling, particularly as they involved long-standing problem areas.

Litter is a symptom of low community morale, as is the incidence of broken windows and neglected green spaces. Disadvantaged areas are most likely to be affected and they require particular and ongoing encouragement and attention from council officials. Dublin’s north inner city and Ballymun were found to be badly littered. So were Ballybane in Galway city, Mahon in Cork and the northside of Cork city.

It costs Dublin City Council about €1 million a year to remove and dispose of illegally dumped waste. Its enforcement efforts – and those of Cork city – in identifying and penalising fly-tippers are not working. Even when fines are issued, fewer than one-third may be paid. A sense of official disengagement is emerging. Reacting to the survey, Minister for the Environment Richard Bruton said local authorities needed to step up enforcement against persistent littering. Such bland words are unlikely to change the situation.