The Irish Times view on Ireland’s peacekeeping work: a record to be proud of 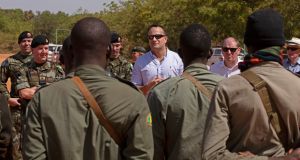 The visit by Taoiseach Leo Varadkar to Irish troops serving on the United Nations mission to Mali in Africa is a welcome and timely reminder of the important role the Defence Forces have played in peace keeping around the world for more than half a century.

The visit by Taoiseach Leo Varadkar to Irish troops serving on the European Union mission to Mali in Africa is a welcome and timely reminder of the important role the Defence Forces have played in peacekeeping around the world for more than half a century. It should prompt the Government to deal with a range of problems which have resulted in all three branches of the service struggling to recruit and retain personnel.

Irish peacekeeping began shortly after the State joined the United Nations in 1955 with a small mission to Lebanon in 1958 followed by a much larger deployment to the Congo in 1960, in which 26 soldiers lost their lives. A total of 86 soldiers have been killed since peacekeeping began with 47 dying in Lebanon. The casualties have not deterred the Defence Forces or successive governments from continuing their commitment to UN or EU missions, with all three branches of the service currently represented on 13 peace operations involving more than 600 personnel.

The role of the Defence Forces in peacekeeping is something of which Irish people are rightly proud and gives a positive expression to the State’s military neutrality. During his visit to Mali, Varadkar was keen to place the mission in a wider context, pointing out that so many problems facing Ireland, such as housing, security threats and climate change, have an international dimension.

The Taoiseach’s visit to Mali to witness the training programme being given by Irish troops to local defence forces was an important morale-boosting exercise but it cannot disguise the need for action to remedy the problems besetting the service. Last autumn it emerged that two Naval Service vessels were unable to put to sea because of crew shortages, while reservists were being used to fill gaps in another vessel. The basic salary of €28,000 for members of the Defence Forces with the rank of private is not enough to attract recruits in an expanding economy where jobs are plentiful. Staff retention is also a significant challenge.

In the past, members of the Defence Forces were provided with accommodation which compensated, in part, for the poor basic salary. But for many this is no longer available, compounding the negative impact of the current housing shortage.

Chief of staff Vice Admiral Mark Mellett, who accompanied the Taoiseach to Africa, said last year that the loyalty serving members of the Defence Forces showed to the State had to be reciprocated. He identified pay as the number one issue for serving soldiers, sailors and Air Corps personnel. It is incumbent on the Government to heed that message while prudently managing the public finances.