The Irish Times view on changes in the Catholic church: a chance to renew 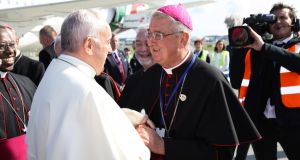 Major change at Catholic Church leadership level in Ireland is imminent as almost a third of the 26 dioceses on the island are scheduled to have new bishops appointed over the next year or two. This is due to incumbents reaching the mandatory retirement age of 75.

Among the eight dioceses concerned are some of the most influential in the Irish church, including in Dublin, Cork and Galway. Bishop of Cork and Ross John Buckley is already 79, four years past retirement. In Galway Bishop Brendan Kelly will be 73 next May.

But it is in Dublin where the starkest change is likely as its two auxiliary bishops will both be 75 this year: Bishop Ray Field in May and Bishop Eamonn Walsh in September.

Meanwhile, Archbishop Diarmuid Martin will be 74 in April. If precedence is followed he too could be replaced this year by a coadjutor archbishop (with right to succeed) as happened when he was appointed Coadjutor Archbishop of Dublin in 2003, succeeding Cardinal Desmond Connell in 2004.

In Ferns Bishop Denis Brennan will be 75 in June; the dioceses of Achonry, Kilmore, and Dromore remain vacant; and 80-year-old Bishop John Kirby is still on duty in Clonfert.

As the average age of the Irish Catholic priest is 70 (for current Irish bishops it is 66), Church authorities now have an age factor to consider as well as a talent issue when it comes to appointing new bishops from a diminishing pool.

It probably means a further reaching to the religious congregations, as with the appointment of Bishop of Raphoe Alan McGuckian (65) in 2017, the first Jesuit appointed to the Irish Episcopal Conference, and Archbishop of Cashel Kieran O’Reilly (66), a member of the Society of African Missions.

He was appointed Bishop of Killaloe in 2010 and moved to Cashel and Emly in 2015.

More generally, these changes will provide an opportunity for a wounded and displaced institution to get back to its roots in a manner that has not been available to it since it became a major political player in mid-19th century Ireland.

It could also allow for the appointment of a church leadership in Ireland with a flavour more reflective of the current papacy than its two immediate predecessors, and as was absent in some recent episcopal appointments.

It is an opportunity for the church in Ireland to lay new foundations and rebuild following the catastrophic consequences of its handling of the clerical child sex abuse crisis.

It is also a chance for it to look to a future post that crisis, and to put in place a leadership team less hampered by the sins of the past – one that retains an essential humility while offering a vision for the future.