The Irish Times view on Poland’s election: stability – at a huge cost 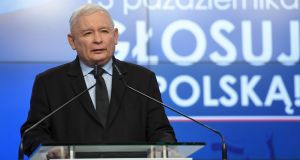 In the eyes of the wily PiS leader Jaroslaw Kaczynski, securing enough seats for a second term would be his party’s just reward for a job well done. Photograph: Piotr Nowak/EPA

In advance of Poland’s general election on Sunday, all opinion polls indicate the national conservative Law and Justice (PiS) will triumph with an even greater parliamentary majority than in 2015. In the eyes of the wily PiS leader Jaroslaw Kaczynski, securing enough seats for a second term would be his party’s just reward for a job well done.

Founded in 2001, PiS has delivered a stability Poland has longed for since the 1980s Gdansk shipyard protests against communist rule. The three decades of post-communist transition forced often brutal neo-liberal economic medicine on Poles and created a chaotic and emotional political culture where the split was often the only item on the agenda. PiS has ended all of that, with firm leadership and political promises delivered.

Its leftist welfare policies and conservative social policies have wrong-footed Poland’s statist left and free-market liberals. The PiS election sweetener in the last election – a 500zl (€115) child allowance – didn’t break the bank, as critics predicted. Instead it made a huge difference to the lives of millions of lower-income families. This election’s promise – a 2,600 zl (€600) minimum wage by 2020 – has been just as popular.

But Poland’s stability and success comes at a cost. PiS has polarised Polish public life to unprecedented levels by mastering fear-mongering and scapegoating: of Russians, Germans, Muslims, immigrants and their allies, and – in this campaign – the LGBT community. Its allies: a politicised Catholic clergy and a pliant state broadcaster. Kaczynski views a second term as a popular mandate to complete his self-styled patriotic transformation of Poland. Critics fear redoubled political efforts to bring the judiciary to heel and crack down on independent media.

Recent courtroom wrangling between Warsaw and Brussels will soon enter its political endgame. When this happens, Poland’s neighbours will have to choose: to remain sideline observers or intervene to defend non-negotiable principles of EU membership: the rule of law and separation of powers.

1 Coronavirus: Everything you need to know about Covid-19
2 Storm Jorge: Warning of power outages, fallen trees and flooding across Ireland
3 Shane Ross: ‘I lost a friendship with Mattie McGrath completely. He got totally personal’
4 ‘F**king n***er.’ A racist incident on Bachelors Walk
5 Murder in a crowded house: The full story of the Patricia O’Connor trial
Real news has value SUBSCRIBE