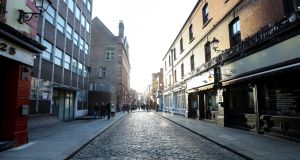 It is imperative that Darragh O’Brien, the new Minister for Housing and Planning, takes serious steps to review the regulations to make Airbnb and other agencies comply with the law. Photograph: Lorraine O’Sullivan/Reuters

Twelve years ago, when Airbnb was first launched on an unsuspecting world, its concept of “home-sharing” sounded like such a good idea. Anyone who needed extra money to pay the rent or mortgage could redecorate a spare room, install air mattresses there, and advertise it as a place to stay for the weekend, offering guests breakfast and giving them tips on the best restaurants and coolest bars in the neighbourhood. But that is not how the San Francisco-based company came to be valued at more than €27 billion, at least before the Covid-19 pandemic trashed international tourism.

The real returns derived from short-letting entire homes, such as the two-bedroom apartment off Temple Bar Square in Dublin that “earned” its owner €79,380 in 2015 as a result of being rented out to tourists via Airbnb, with a 90 per cent occupancy rate. Even though An Bord Pleanála ruled in October 2016 that this constituted a change of use from residential to commercial, thereby requiring planning permission, hundreds of property owners clambered on board the Airbnb bandwagon, terminating the leases of long-term renters so that whole houses and apartments could be more profitably short-let to tourists.

Naturally, there was a push-back from cities anxious to protect housing stock from being turned into illicit hotel accommodation, adopting regulations to curtail the short-letting of “entire homes” in the teeth of lobbying and even legal actions by Airbnb to safeguard its business model. But the short-term letting regulations introduced in Ireland a year ago this month have failed to make any impact in recovering lost stock, which included more than 5,000 houses or apartments that were being short-let in Dublin via Airbnb alone before Covid-19 intervened. And let’s not forget that this was happening in the midst of an acute housing crisis.

Although the issue was not even mentioned in the Fianna Fáil-Fine Gael-Greens programme for government, it is imperative that Darragh O’Brien, the new Minister for Housing and Planning, takes serious steps to review the regulations to make Airbnb and other agencies comply with the law by ensuring that every “entire home” being short-let has planning permission for commercial use.