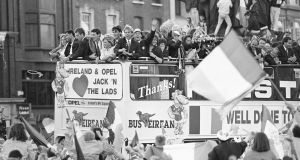 Fans throng Dublin’s O’Connell Street in July 1990 to greet the Republic of Ireland team on their return from the World Cup in Italy. Photograph: The Irish Times

In his long career as a World Cup-winning footballer, followed by great success as a club and international team manager, Jack Charlton prided himself on the maxim that soccer is a simple game that should be played with simple tactics. That belief, which was often portrayed as crude and a betrayal of the beautiful game by his critics, brought unimagined success to the Irish team he took over in 1986. From a position of always coming up just short in qualifying for major tournaments, Charlton took Ireland on a sporting odyssey that went way beyond what happened in 90 minutes on a football pitch.

A man who eschewed political correctness, Charlton’s natural impishness struck a chord with the Irish public from the outset, whether sports fans or not. Long deprived of enjoying the prospect of accompanying an Irish team to major events, supporters eagerly followed Charlton’s charges to the grandest stages in world sport – the finals of World Cups and European Championships. But qualifying for these great tournaments was not sufficient for the blunt Geordie. He wanted his team and its supporters to relish the experience and savour the memories they would take back from Germany in 1988, Italy in 1990 and the USA in 1994.

Unlikely victories over England in Stuttgart in the opening game of Euro ’88 and Italy in the first match of USA ’94 were a huge fillip for the country. Taking the scalps of two of the powerhouses of world football may have been the supporters’ happiest hours, but the victories also underlined how astute an international manager Charlton had become. Although he was lucky to have some great individual players at his disposal, he forged a fantastic squad spirit which meant the team was always greater than the sum of its parts. That honesty of effort, along with squeezing the most out of life, restored an element of pride to a country that had been through tough times in the 1980s.

Anyone who lived through the heady years of the Charlton era will forever be grateful to this most Irish of Englishmen. He gave us reason to cheer and we took him to our hearts.