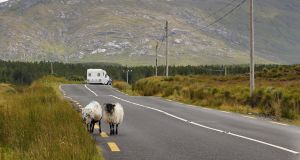 All parts of the country will be affected by Brexit. But rural Ireland is particularly exposed because many areas depend heavily on tourism, worst hit by Covid-19, and on the food sector, most exposed to Brexit. Photograph: Getty Images

In terms of getting detailed indicators on the state of the economy, what we have to date still gives an incomplete picture of the early hit from the Covid-19 crisis. However it is clear that the economy has been pushed into recession and that although activity has increased as sectors reopen, significant problems and uncertainties remain.

Economic policy is always framed against the backdrop of some uncertainty, but the virus has moved this to a new level. The threat of additional waves of the virus and the uncertainty facing many sectors of the economy make the task of shaping the next phase of the economic rescue programme very difficult. Not only will demands exceed available resources, but it is also challenging to develop an appropriate response for sectors such as tourism and hospitality when the outlook for them is so uncertain. At least some resilience in tax returns leaves some room for manoeuvre.

As well as Covid-19, there are other threats on the horizon. Perhaps the most pressing is Brexit and the risk that the UK leaves the EU trading regime at the end of this year without a new trade deal. Combined with the hit from the pandemic, this creates a worrying outlook heading into next year and the possibility of a perfect storm of two major shocks.

Talks between the UK and EU on a new trade deal have made little progress so far and there is no great optimism of a breakthrough as they continue this week. The UK has already said it will not seek an extension in the talks beyond the end of this year – and the deadline for doing so has now passed. Elsewhere the familiar problems remain, with the UK unwilling to sign up to the kind of commitments required by the EU for access to the single market.

The best that can be achieved now is a basic deal. This would still impose extra costs on trade between Britain and Ireland due to new customs procedures and delays. However, as the Central Bank quarterly report made clear last week, the costs and threat would rise significantly if no deal was completed and the UK and EU moved to trade on WTO terms. Food exporters would be particularly exposed. And wider delays and upheaval for a period are possible.

Brexit would hit traditional exporters hardest and, as the latest CSO data shows, output from this sector is already down sharply. This opens up new problems for policymakers at precisely the time they would be trying to stimulate the economy after a big drop in output during 2020.

The impact of the two threats is different, though there is one common thread. All parts of the country will be affected. But rural Ireland is particularly exposed because many areas depend heavily on tourism, worst hit by Covid-19, and on the food sector, most exposed to Brexit.