The Irish Times view on Trump’s diplomacy: a fiasco in Quebec 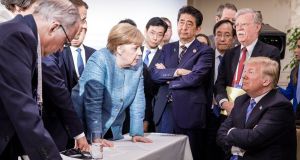 A photo released on Twitter by the German government spokesman Steffen Seibert on Saturday, and taken by the German government’s photographer Jesco Denzel, shows US president Donald Trump talking with German Chancellor Angela Merkel and surrounded by other G7 leaders during a meeting of the G7 Summit in La Malbaie, Quebec. Photograph: Jesco Denzel/ Bundesregierung/ AFP photo/Getty Images

Even before the unprecedented summit between US president Donald Trump and the North Korean dictator Kim Jong-un began in Singapore overnight, it was a resounding success. For Kim, that is. A face-to-face meeting with the leader of the world’s most powerful country has long been on Pyongyang’s wishlist, but Washington, seeing the propaganda value of such a set-piece for the autocratic regime, has always resisted offering that concession without first seeing progress in talks on denuclearisation. In agreeing to the summit, Trump in effect proved right the rationale that long underpinned Pyongyang’s nuclear drive: only by having weapons of mass destruction could North Korea be treated as an equal by the world’s great powers. The summit should have been the final step in the process, not the first. Not only that, but Trump agreed to it without requiring anything other than rhetorical concessions from Kim.

We’ll see in the coming months whether those words, due to be restated in Singapore, will translate into actions, but there is good reason for scepticism. In 2000, the then president of South Korea, Kim Dae-jung, won the Nobel peace prize after talks with his Northern counterpart, Kim Jong-il, appeared to hold out the promise of a historic deal. The initiative went nowhere. On that and several other occasions, Pyongyang has agreed to talks on its nuclear programme, banked the benefits (usually food aid, cash or a relaxing of sanctions) and then pulled the plug.

The juxtaposition between the Trump who landed in Singapore and the one who attended the G7 summit in Quebec at the weekend was striking. On the eve of his meeting with Kim, the US president radiated energy and optimism. At the G7 summit at the weekend, Trump was sour, surly and offensive. He appeared to be more comfortable about the prospect of meeting a brutal dictator than a gathering of democratic allies.

In time, the Quebec G7 may be seen as the point at which the chasm between Trump’s America and its western allies became unbridgeable. The summit was a fiasco. On the eve of his arrival, Trump said Russia should be allowed back into the group. He arrived late for meetings, refused to compromise on trade, disparaged other leaders and left early. He then repudiated the joint communique in an angry tirade on Twitter.

It’s easy to dismiss such behaviour as just more Trumpian posturing. But something much more profound is taking place. Under Trump, the US is breaking with its western allies on a range of key policy issues, from climate and trade to the Middle East. Trump is openly hostile to the post-war order that the US was instrumental in establishing. If there were any US allies who still clung to the hope that the US president could be manoeuvred back to the mainstream, the failure of the G7 in Quebec was a salutary lesson.