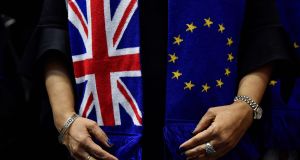 Silence surrounding the Brexit talks is being seen as evidence that negotiators are nearing the endgame. File photograph: John Thys/AFP via Getty Images

Although there is no official confirmation, the silence surrounding the resumed Brexit talks in London is being seen by optimists as evidence that the negotiators may have entered the “tunnel”, the information blackout that usually precedes delicate final concessions and the endgame. Tanaiste Simon Coveney has suggested that a deal is likely in the next two weeks but warned “it won’t be easy”. Who knows? We have been here many times before.

Officials on both sides are saying little beyond confirming unofficially that they expect to continue talking in Brussels next week, and that they see mid-November as the final, final deadline beyond which any deal could simply not be ratified before the transition phase ends when Big Ben strikes in the New Year. At issue still are the challenges of a state-aid level playing field, fisheries and governance, specifically dispute resolution mechanisms.

Joe Biden has warned he will not sign any US/UK trade deal, on which Brexiteers are desperately counting, if he believes it runs counter to the Belfast Agreement

The latter is inevitably tied up with the fate of the British Internal Market Bill with its provisions allowing the government to renege on its commitments in the withdrawal agreement to accept arbitration of disputes about border control measures. It is inconceivable that the EU could agree another disputes mechanism, likely to be broadly similar, without watertight assurances that its predecessor remains in place and that the British are committed to honouring its provisions.

The House of Lords now appears certain to facilitate that outcome on November 9th by defying the government and voting down six articles of the Bill. If it does so, it seems inconceivable that the government, if it is serious about a Brexit deal, would then whip through their restoration by the Commons.

And even if a deal no longer appears possible, and the UK is heading for a no-deal Brexit, the Tories are only too well aware that Joe Biden, who may have been elected US President by then, has warned that he will not sign any US/UK trade deal, on which Brexiteers are desperately counting, if he believes it runs counter to the Belfast Agreement. Yet another moving part at a critical juncture.