The Irish Times view on abortion in Poland: taking to the streets 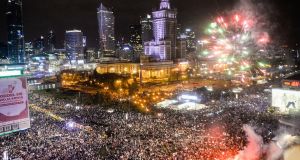 People holding banners and shouting slogans in Warsaw on Friday night as they continue to protest against the constitutional court ruling on tightening the abortion law. Photograph: Omar Marques/Getty Images

Undaunted by the surge of coronavirus and the threat of mass arrests, tens of thousands of women marched through Warsaw on Friday night in protest at a court ruling that rowed back massively on the country’s already restrictive abortion regime.

The march, also strongly supported by men, brought to more than 400,000 in 400 demonstrations the numbers who have protested across the country in the 10 days since the constitutional court banned all abortions except those where women’s health is threatened or where rape or incest are involved.

They are the largest protests the country has seen since the fall of communism, and for the first time Catholic Poland has seen the targeting of churches, with masses disrupted and priests challenged on the pulpit.

Although overwhelmingly peaceful, on Friday there were a number of attacks on the marchers by militant nationalist supporters of the ultra-conservative Justice and Law (PiS) government.

In 2016 attempts by PiS to enact a complete ban on abortion, legal in Poland since 1956, were partially thwarted by spontaneous mass demonstrations by women’s groups. Unable to muster a majority in parliament for a further tightening, this time the party has used its control of the constitutional court that it has packed with sympathetic judges, to achieve the same end without the need for parliamentary support.

The court ruled that women would no longer be able to cite severe foetal abnormalities for having an abortion, the justification for almost all of the 1,000-a-year current legal abortions. An estimated 10 times that number of women go abroad annually for abortions or have them illegally. Now many fear they may be forced to carry unviable foetuses to term. Polls show the public does not support change – one from 2018 found 70 per cent against a ban based on foetal abnormalities.

As PiS moves to reward and consolidate its Catholic base, it may however find that this is a trial of strength it can no longer win in a modernising Poland.