The Irish Times view on Lebanon’s protests: the WhatsApp revolt 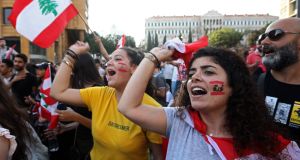 Lebanese protesters take to the streets of Beirut on Monday during demonstrations to demand better living conditions and the ousting of a cast of politicians who have monopolised power and influence for decades, on October 21, 2019 at Riad al-Solh Square in Beirut. Photograph: Anwar Amro/AFP via Getty Images)

Not since the Cedar revolution of 2005, which resulted in Syrian forces leaving the country after 15 years of post-civil war involvement, have crowds taken to the streets of Lebanon in such numbers or for so long. Protesters blocked roads and forced schools, banks and businesses to close for a fifth day on Monday. Far from petering out, the movement appears to be gaining momentum and now poses a serious challenge that the government of Prime Minister Saad al-Hariri cannot dismiss.

The protests reflect long-simmering anger over Lebanon’s crumbling services, price rises and what many Lebanese see as a culture of corruption and nepotism in the ruling elite

Public discontent tipped over last Thursday after the cabinet approved a range of new taxes, among them a levy on use of the messaging tool WhatsApp. The government, which presides over one of the most indebted states in the world, withdrew the WhatsApp tax, but it was too little, too late. The protests reflect much wider, long-simmering anger over Lebanon’s crumbling services, price rises and what many Lebanese see as a culture of corruption and nepotism in the ruling elite. Perhaps most remarkable about the public show of dissent is its social and geographical reach: in a society normally divided on sectarian lines, Christians, Sunni and Shia Muslims have all taken to the streets to call for the country’s rulers to make way.

Four ministers from the Christian Lebanese Forces party withdrew from the government on Saturday, adding to the pressure on Hariri. He approved an emergency package of economic reforms on Monday in direct response to the protests, but it would be an error to think that that in itself will bring calm to the streets. In Tunis and Cairo in 2011, in the early months of the Arab Spring, incumbent governments misjudged the scale of public anger and wrongly assumed that expressions of sympathy and promises of policy tweaks would amount to an adequate response. Sheikh Hassan Nasrallah, leader of Hizbollah, the most powerful political force in the country, has said he opposes the government’s resignation. But even that may not be enough. If the political class wants to get ahead of the crisis, it may require the dissolution of the parliament itself.