The Irish Times view on social change in Northern Ireland: a landmark day in Belfast

The North is joining the European mainstream, and it will be a better place in which to live as a result 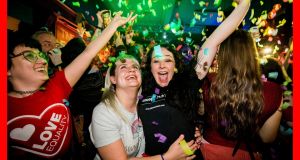 Two momentous changes occurred in Northern Ireland in the early hours of yesterday morning. First, the criminal ban on abortion fell. Women who seek abortions in the North will no longer be prosecuted, and investigations or prosecutions which were already under way were halted. Legislation on abortion is due to be in place by March 31st 2020.

Second, the remaining legal impediments to same-sex marriage were cleared, with the result that from January 13th next year, same-sex couples will be able to give notice of their intent to form a marriage or civil partnership. The first same-sex marriages are expected to take place around Valentine’s Day.

These important changes took effect with the coming into force of the Northern Ireland (Executive Formation) Act, which was passed by Westminster in July. Under its terms, the British government was legally obliged to change the law to remove the bans on abortion and same-sex marriage unless the North’s powersharing institutions were reinstated.

All of this has inverted the usual rules of political debate. The DUP, which opposed the July Bill in the House of Commons, rejects alignment with Britain on these social issues even as it fights passionately against the principle of east-west regulatory divergence in the Brexit debate. Sinn Féin, which supports both changes, finds itself cheering the decision of a parliament it boycotts and whose jurisdiction it ardently disputes.

Northern Ireland is joining the European mainstream, and it will be a better place in which to live as a result

It would have been preferable for the powersharing institutions to take these decisions. Indeed, there had been signs in recent times that the DUP might have been persuaded not to use its Assembly veto to block marriage equality. But the Assembly has not sat for 2 ½ years, and there is no sign of it reconvening any time soon. In the meantime, a grave injustice has continued to be done to same-sex couples who wish to avail of the same rights available to those in the Republic and in Britain, and to women who wish to exercise their right to choose to end a pregnancy.

The case for these changes was inarguable. That is not to denigrate the good faith of those who oppose either of them. But with these reforms, Northern Ireland’s legal system is merely recognising the complexity, the messiness, the contingency of the human experience and rejecting a worldview that sees that world as a place of moral absolutism. Northern Ireland is joining the European mainstream, and it will be a better place in which to live as a result.

The decision to remove these legal bans was taken in London, but neither change would have happened were it not for the tireless and often lonely work of advocates over many decades, not least those women who had been denied abortions in the most distressing and painful circumstances. This is their moment.