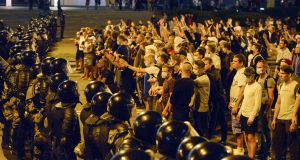 Alexander Lukashenko was until recently dubbed “Europe’s last dictator”, but prior even to his weekend “landslide re-election” to a sixth term as president, that dubious honour is now shared by at least two others, Hungary’s Viktor Orban and Turkey’s Recep Tayyip Erdogan. Yet in Belarus cracks are beginning to appear in the monolith.

Demonstrations and clashes with the police have swept the country from Minsk to 20 other cities, including Gomel and Vitebsk, after the electoral commission declared Lukashenko re-elected.

Some 3,000 people were arrested but the opposition remains undaunted. In some towns riot police reportedly refused orders to take on demonstrators, a sure sign that the regime’s political base is shrinking.

Lukashenko, the electoral commission said, took a preposterous 80.23 per cent of the vote while main opposition challenger Svetlana Tikhanovskaya, who has held some of the country’s largest political rallies since the days of the Soviet Union, had only 9.9 per cent. The opposition points to widespread irregularities.

Lukashenko’s victory was welcomed first by erstwhile ally Vladimir Putin, and by new-found ally China. Although he has fallen out with Russia, notably over crippling oil price hikes, demands that Belarus integrate into a new Russia-led union and unproven claims of interference in the election, Lukashenko will be aware that Putin will do anything to ensure his regime does not fall to a western-leaning alliance. That would presumably include even military intervention in what Moscow regards as its sphere of influence.

Lukashenko enjoyed genuine support at the start of his rule, appealing to voters by preserving many aspects of the Soviet-era economy

But such half-hearted external support will be cold comfort to Lukashenko, whose support levels, recent polls suggest, have declined to less than a third of a population suffering widespread fatigue over his 26 years in office, incompetent economic management, and his denialism over the coronavirus pandemic.

Belarus, with a population of 9.5 million, has had more than 68,000 confirmed cases.

A former collective farm manager, Lukashenko enjoyed genuine support at the start of his rule, appealing to voters by preserving many aspects of the Soviet-era economy, including a large but inefficient state-owned industrial sector, and by remaining close to Russia.

But quite quickly his increasing resort to authoritarian methods has been a sure sign of the erosion of such support and the ultimate precariousness of his rule.

Now the ghost of eastern Europe’s 1989 revolution is beginning to stalk this relic of the Soviet bloc. Lukashenko may well be recalling nervously the grisly departure of the Ceausescus. It’s time for him to go.