The Irish Times view on its Ipsos MRBI poll: A coalition of mixed fortunes 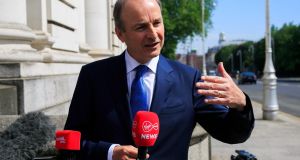 There are mixed messages in the latest Irish Times/Ipsos MRBI poll for the three parties that have agreed a programme for government, but the results suggest that the proposed coalition will have a fair wind behind it at the start of its term of office. The most spectacular findings are that Taoiseach Leo Varadkar and his caretaker government have achieved some of the highest ratings since MRBI began polling for the Irish Times almost 40 years ago.

The Taoiseach has a satisfaction rating of 75 per cent, up 45 points since the last poll taken during the February election. The Government’s standing has risen by an astonishing 51 points to 72 per cent over the same period. These record ratings suggest very significant public support for the way the Covid-19 crisis has been handled to date.

The paradox is that if a three-party coalition involving Fine Gael, Fianna Fáil and the Green Party is approved by their members then Varadkar will have to stand aside as taoiseach for the next two years to make way for Micheál Martin. While Martin’s satisfaction rating in the poll is up significantly to 46 per cent, he trails well behind Varadkar and, to make matters more difficult, his party’s performance is dismal.

In party terms, Fine Gael has seen a big jump in support to 37 per cent, up 16 points since the general election but Fianna Fáil is down nine points to just 14 per cent. The Greens have almost doubled their support to 12 per cent while Sinn Féin is solid on 25 per cent. There is a broad welcome for the involvement of the Greens in government, even though tackling climate change is a priority for just 8 per cent of the electorate.

The challenge facing the three parties is how to retain the massive public confidence in government generated by the handling of Covid-19 as a new taoiseach takes over the reins and a majority of cabinet ministers lose their jobs to make way for Fianna Fáil and Green ministers. It will require a strong and unified performance from all three party leaders and their ministers to build public support for their ambitious but often vague programme.

The challenges they face are immense. For a start the Covid crisis is far from over and charting a course back to something like normality will not be easy. Getting the economy working at full throttle to meet targets for housing, health, transport and greening the economy will be equally daunting.

What the dramatic improvement in the poll ratings of the Taoiseach and the Government demonstrates is that the public is capable of responding positively to clear and resolute decisions taken in response to a potentially overwhelming threat. The three parties will need to show similar leadership skills in the years ahead to deliver on their promises of reform and renewal.