The Irish Times view on the US attack on the International Criminal Court: A new low 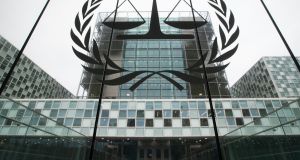 The International Criminal Court in The Hague, Netherlands. Photograph: AP

It’s straight out of the Polish government playbook. An outrageous decision by US president Donald Trump to impose sanctions on the International Criminal Court (ICC) is, as the court itself has described it, an “unacceptable” interference with the rule of law and “an attack against the interests of victims of atrocity crimes, for many of whom the court represents the last hope for justice”.

The US decision to impose economic sanctions and travel bans on senior court officials and to open an investigation into “corruption” in the court, arises from anger over the ICC’s efforts to look into alleged war crimes by US troops in Afghanistan and Israeli actions in the Occupied Territories. “We will not stand by as our people are threatened by a kangaroo court,” secretary of state Mike Pompeo said. He described the ICC as “corrupt,” “grossly ineffective,” and “highly politicised”. The war crimes court, based in the Hague, is on an “ideological crusade against American service members”, he claimed.

ICC judges in March authorised investigations into a range of alleged wrongdoing in Afghanistan, including actions by Afghan forces, US troops and the Taliban, and last December into crimes by Israeli and Palestinian forces. It was the first time the court’s prosecutor had been permitted to investigate actions by US forces. In 2019 a UN report found that more civilians were being killed in Afghanistan by government and US forces than by the Taliban and other insurgents.

The US is not one of the court’s 120 signatories because Bill Clinton’s sign-up was never put for ratification in Congress. The court started operations in 2002 to investigate crimes against humanity and genocide, and Washington has on a number of occasions cooperated with its work, particularly on Sudan.

The ICC is one of the many international multilateral organisations, including the UN, WHO, and WTO, against which Trump has declared a personal vendetta. Explicit attempts to sabotage their work, however, takes his campaign to a new level.