The Irish Times view on sport and politics: of course they can mix 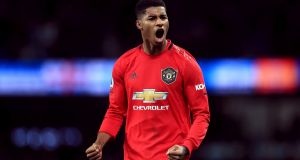 ‘Stick to sport”. With that infantilising dismissal, sports fans, politicians and above all the clubs that employ them have long discouraged elite athletes from expressing anything that might be construed as an opinion on the world outside their game. Officially, the rationale was that sport should sail above the fray of political battle. Perhaps of more concern to clubs was that politics, they believed, was bad for business. It could alienate fans and the sponsors who were assumed to want their brands sterilised from grubby politics. And so, when the American footballer Colin Kaepernick took a knee to protest police brutality in 2016, he was cast aside by his own sport. In European football, players who lifted up their shirts to reveal even the most inoffensive show of solidarity could find themselves cautioned or fined.

This month, the fantasy that sport and politics can or should always be kept apart has crumbled. In England, the 22-year-old Manchester United forward Marcus Rashford fought an intelligent, powerful public campaign that forced Boris Johnson’s government to reverse its decision to cut meal vouchers for 1.3 million vulnerable children during the holidays. Across town at Manchester City, another young player, Raheem Sterling, has emerged as one of the most compelling anti-racism campaigners in Britain.

The Black Lives Matter movement is reverberating widely, in sport just as in the rest of the world. US soccer’s governing body has rescinded a rule that required players and staff to “stand respectfully” for the national anthem – a policy it introduced just a few years ago after star player Megan Rapinoe took a knee. When the Premier League resumed last week, every player was allowed to have the words Black Lives Matter instead of their name on the backs of their shirts.

Difficult dilemmas lie ahead, of course. When they find themselves dealing with protests that do not have widespread backing, sports administrators will struggle in the role of arbiter. Still, recent weeks have shown that sport and politics can, and sometimes must, be allowed to mix.