The Irish Times view on banks’ response to coronavirus: Scrap the dividend 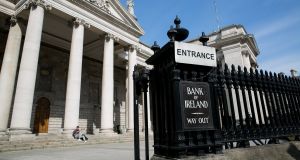 To further underpin their finances, AIB and Bank of Ireland must abandon their plans to pay €400 million of dividends - even if the Government, as the biggest shareholders in both, is due to receive €180 million of this amount. Photograph: Gareth Chaney/Collins

The banks are not responsible this time for the economic crisis that has engulfed Ireland and the rest of the world. But how they behave will play a critical part in how households and businesses get through the emergency. The speed with which banks in Ireland and elsewhere agreed to offer temporary payment breaks to mortgage, personal and business borrowers is to be welcomed – even if there are reports that it took a bit of time for what was agreed to filter down to the front lines.

Banks have had to move with extraordinary speed to change systems to provide mass relief to tens of thousands of customers. They are not the only ones, however, who have had to adjust to new realities posed by this unprecedented shock.

Unlike the last crisis, banks have much higher levels of capital reserves that can be used to support lending to the economy, and analysts believe that Irish lenders, in particular, are better positioned to deal with a surge in bad loans resulting from the downturn than many European peers. But who knows how deep or long-lasting an inevitable recession will be.

It is comforting to see the Central Bank move in recent weeks to relax bank capital rules, so that lenders can dip into their rainy-day reserves to keep money flowing through the system. The Government estimates this would support banks making an additional €13 billion of credit available.

To further underpin their finances, AIB and Bank of Ireland must abandon their plans to pay €400 million of dividends – even if the Government, as the biggest shareholders in both, is due to receive €180 million of this amount. That level of capital could support more than €5 billion of lending, or provide an additional cushion for the banks as their bad loans inevitably rise. Taxpayers pumped about €30 billion into Ireland’s three surviving banks during the financial crisis to ensure the Republic continued to have a banking system. AIB and Bank of Ireland must move swiftly to scrap their dividend plans to help ensure they are fully equipped to help businesses and households to cope in the coming weeks and months.