The Irish Times view on coronavirus testing: a system unable to meet demand

The State needs to do better on testing and transparency 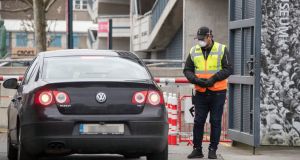 Even the best national pandemic contingency plans would have come up short in at least some respects when faced with Covid-19, which could be the most deadly and the most disruptive viral menace the world has faced since the Spanish Flu in 1918. But already we are seeing that some states have shown themselves markedly more adept than others at containing their outbreaks and protecting their citizens.

Why is that? It may be too early to say definitively why Italy was so badly hit, or why Germany has managed to keep its fatality rate from the illness significantly lower than elsewhere, but we have enough information to say that, so far, the states that have done best are those that have done the following: prepared, planned, learned from others and moved quickly towards large-scale mobilisation. It’s no accident that South Korea, Singapore and Hong Kong have succeeded in containing their outbreaks, notwithstanding recent imported cases. They learned lessons from their experience of the Sars (2003) and Mers (2012) outbreaks, when insufficient testing and equipment hampered many Asian countries’ responses.

This time, they were ready. In South Korea and Singapore, the emphasis has been on aggressive testing, contact tracing, social distancing and isolation of confirmed or suspected cases. South Korea produced bespoke Covid-19 testing kits in record time and in vast numbers. Singapore also practised radical transparency, allowing its citizens to monitor every confirmed case in real time online. Germany has also tested heavily.

Here, the Government is right to follow those examples. By grasping relatively early that it had to prioritise testing and tracing, and communicating effectively with the public, it won valuable time and no doubt has saved some lives. In contrast, the UK and the US, where testing is at dangerously low levels and contact tracing alarmingly patchy if not non-existent, the governmental response has been disastrous.

Yet the authorities here still have far more to do. We need a great deal more transparency on the Irish outbreak, particularly on those who have died. There should be greater stress on isolating the elderly and vulnerable. And a key concern is testing. Without knowing who is infected and how widespread the virus has become, we are fighting it blind. A rapid expansion in “community sampling centres” means the State can now gather 4,500 swabs a day, but a shortage of lab equipment means only 1,500-2,000 results can be processed. The result is that 40,000 people are waiting to be swabbed – a bottleneck that has forced the Government to narrow its testing criteria. These delays mean the value of contact tracing is diminished and key healthcare workers are spending longer unavailable to work in hospitals and clinics. Faster and wider testing, with rigorous contact tracing, must be a priority.