The question of how and when to exit restrictions, talks on which adjourned without agreement on Wednesday night, crudely pits economy versus public health 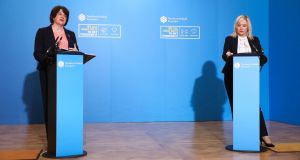 The wonder is that it survives. Northern Ireland’s mandatory five-party executive is buffeted by Covid-19 and laces fundamentally opposed parties together against their history. How and when to exit restrictions, talks on which adjourned without agreement on Wednesday night, crudely pits economy versus public health. Unlike the picture earlier in the year and the Republic’s comparative success in driving down the rate of infection, the North’s figures are worryingly high.

Region-wide constraints imposed with difficulty by Stormont last month and due to expire at midnight on Thursday, exposed underlying contradictions. Hopes of an agreed exit flared then faded. It became the DUP versus the rest. Use of their veto has exasperated the three smaller parties, the Ulster Unionists, SDLP and Alliance, while Sinn Féin has come under suspicion of posturing to make capital.

Business considerations cross the community divide, like fears for an exhausted, underfunded health service. Individual DUP figures have soured the mood by anti-mask outbursts and pointing up Covid-19 rates in Catholic/ nationalist/republican districts. The Sinn Féin leadership’s behaviour at the funeral procession of IRA leader Bobby Storey has not been forgotten. In effect the veto, a device to prevent discrimination, blocked extension of the restrictions as urged by the medical/scientific advice and that of Ulster Unionist minister for health Robin Swann. His determination has won widespread respect. His mooted shorter extension of restrictions – plus additional financial support and better communication – may win the day. Deputy first minister Michelle O’Neill’s suggestion that restaurants might sell meals without alcohol was much mocked but looked like a belated attempt at a compromise.

An accusation that runs through 21st century Stormont’s history, damaging because factual and apparently incapable of remedy, is that the two big parties run the show without reference to their three supposed partners but also without policy debate. Neither DUP nor SF wants to collapse the structure but there is no warmth.

As Brexit barrels into sight, DUP leader Arlene Foster and O’Neill last week co-signed a letter to the EU pleading for special consideration of NI’s supply lines. They were rebuffed, though with some soft words. Remarkable for crossing the red lines between Leaver Foster and Remainer O’Neill, this was arguably the most substantial policy document the pair have produced. Foster is DUP leader by default, damaged by the RHI scandal but with no obvious acceptable rival. The veto was proposed by Edwin Poots, her agriculture minister and one of several party figures who have challenged lockdowns, preventing development of a strategy. There will be more struggles.