The Irish Times view on Harland and Wolff: Decline and fall

Danger that engineering, design, technical skills built up over generations may be lost 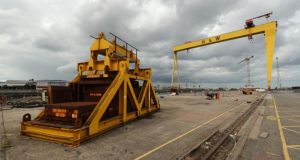 A load test rig (left) and the Samson gantry crane at the Harland and Wolff shipyard after workers voted to continue their occupation. Photograph: Liam McBurney/PA Wire

The implications of a no-deal Brexit are looming over Northern Ireland. The atmosphere of fear and uncertainty has been heightened by the news that Harland and Wolff has been placed in administration after failing to find a buyer.

Meanwhile, the Canadian aerospace company Bombardier, following repeated warnings, announced that it intends to sell up and leave. Thousands of jobs are at risk.

The Harland and Wolff shipyard has been in slow decline from the halcyon days when it employed a workforce of 36,000 and built the largest and most luxurious ocean-going liners in the world, among them the Titanic. But the yard failed to innovate to meet changing marine requirements while the growth in air traffic eroded its primary market.

In spite of that and a desire by a majority of Northern Ireland voters to remain in the EU, the British government appears fixated on a crash-out exit

Before the last pay cheques were issued this week, workforce numbers were down to 130 and the business had been on the market for a year. The last ship built there sailed in 2003. Work had contracted to involve some heavy marine engineering, offshore and renewable energy projects and ship repairs.

The shipyard ran out of money and was bailed out by the British government in 1966 before being nationalised in 1975. Along with aerospace company Short Bros, it was privatised in 1989. A Norwegian company, Fred Olson, took Harland and Wolff while Bombardier acquired Short Bros.

Bombardier still employs some 4,000 full-time and seasonal workers at five locations in the North, although the workforce has halved since 2014. The international nature of its supply chain and markets caused the company to warn it would be “hugely exposed” if a no-deal Brexit took place. Last May, it said it was leaving.

There is a danger that engineering, design and technical skills built up over generations may be lost during a period of rising tariffs and restricted trade. That would be in nobody’s interests.

In spite of that and a desire by a majority of Northern Ireland voters to remain in the EU, the British government appears fixated on a crash-out exit.