The Irish Times view on the Kashmir crisis: A dangerous provocation 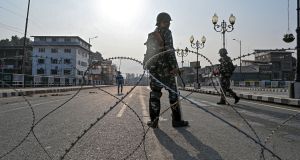 Indian paramilitary troopers stand guard behind a barbed fence wire as they block a road during a curfew in Srinagar on Monday. Photograph: Tauseef Mustafa/AFP/Getty Images

The new Indian government of Narendra Modi has lost little time fulfilling the election promise to its Hindu nationalist supporters to change Kashmir’s protected constitutional status as a Muslim majority state. In a deeply provocative move, it has scrapped article 370 of the Indian constitution, which enshrined that status. It has imposed effective martial law on the territory and cut off its everyday communications. Indian Kashmir will now be directly ruled from Delhi and Hindus will be able to buy property and get jobs there.

These changes reverse the complex, messy yet functional regime in place for seven decades that kept a rough equilibrium between Indian-controlled Kashmir and the other parts of the territory run by Pakistan and China. A product of the partition between India and Pakistan imposed by Britain as part of the decolonisation package, these arrangements have survived three wars between the nuclear-armed states and have helped maintain a balance between ethnic and religious divisions there. They have now been summarily unravelled.

The Modi government defends its actions on the grounds that Kashmir’s special status is an anomaly which unfairly benefits special interests, siphons off funds and offends India’s Hindu majority. Article 370 was put in place by the Congress party which dominated Indian politics for most of the time since independence, but is now decisively marginalised in the last two general elections won by Modi’s Hindu nationalist Bharatiya Janata Party. Its militants applaud the decision and welcome its departure from that secular tradition.

Modi promised prosperity and inclusivity to Indians after his victory last May. By moving so determinedly to satisfy a key demand of his party he has compromised inclusivity and could threaten the prosperity that won him such widespread support. The Kashmir move will encourage sectarian divisions and majority triumphalism in domestic politics, which would divert efforts better directed to economic development. It destabilises relations with Pakistan and China at a time when wider geopolitical changes in South Asia give India an opportunity to assume a more constructive regional role.

It will take time to see how this affair unfolds. The government’s decisions are likely to be challenged legally through India’s supreme court even though it has enough parliamentary support to see them through. The brutal repression and large troop deployments needed to impose the changes in Kashmir could rebound and encourage a renewal of militant resistance there, backed by Pakistan. Modi’s privileging of the domestic politics of Hindu nationalism over a well-established constitutional arrangement may cause a lot more trouble than he anticipates.