For electoral ends, Jaroslaw Kaczynski has stoked a pogrom mood in Poland. Like Goethe’s sorcerer’s apprentice, he is no longer in control of the forces he has summoned 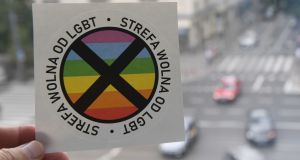 A picture taken in Warsaw shows a sticker bearing a large black cross over an LGBT+ rainbow motif and reading “This is an LGBT-free zone”, that is distributed with the latest issue of magazine Gazeta Polska, a news magazine close to Poland’s right-wing government. Photograph: Janek Skarzynski (AFP/Getty Images)

Pain and pride are never far apart in Poland’s long history of suffering at the hand of its neighbours. Last week the country came to a standstill to remember one of its most proud and painful moments: the Warsaw Uprising in 1944 against the Nazi occupation.

Beginning on August 1st the Polish home army, tired of waiting for Allied assistance, rose up against occupying Nazi forces in the Polish capital. After 63 desperate days, outnumbered and outarmed, the Poles capitulated on October 2nd. At least 18,000 Polish soldiers and up to 150,000 Polish civilians were killed. Hundreds of thousands more were sent to labour and concentration camp. In a final act of unspeakable vengeance, the Nazis razed Warsaw to the ground as they retreated and the Red Army moved in.

The Uprising is a terrible reminder of the tyranny of a war instigated by Nazi political poison, that Slavs, Jews or other peoples were somehow “inferior” - or even a threat - to Aryan Germans. When the anniversary passes, however, Poland’s ruling Law and Justice (PiS) party will switch from victim to perpetrator, spreading poison of their own.

With an autumn election to win, PiS has realised that anti-Semitic and anti-immigrant incitement are no longer as effective as they once were. So PiS leader Jaroslaw Kaczynski has found a new scapegoat. The LGBTI community are now a seminal threat, he argues, to Polish identity, families and traditional values. Some Catholic bishops have come aboard. Blasted with hate speech from the pulpit and TVP, Poland’s public broadcaster, Poland’s slumbering monster of deep-seated homophobia has been awakened.

Regional LGBTI marches have turned into riots. Terrified marchers have been confronted by stone- and bottle-throwing football hooligans, far-right nationalists and ordinary passersby, jeering openly about “Polowanie na pedala” - faggot hunts. PiS officials alternate between condemning LGBTI “ideology” and condemning the resulting violence against the LGBTI community. Polish society is more polarised than ever and not even history is safe.

Olympic sportswoman Zofia Klepacka argued she would defend “traditional Poland” because this is the country her grandfather fought for in the 1944 uprising. Wanda Traczyk-Stawska, a 91-year-old uprising survivor, disagreed. saying the motivation - and lesson - of the Uprising is the demand to treat everyone with dignity. And the foundation of dignity, she wrote, is freedom of association, religion, political views or sexual orientation. “Provided no one gets hurt,” she wrote, “everyone has a right to be different.”

For electoral ends, Jaroslaw Kaczynski has stoked a pogrom mood in Poland. Like Goethe’s sorcerer’s apprentice, he is no longer in control of the forces he has summoned. But he carries responsibility.