The Irish Times view on the children’s hospital: we need to heed the warnings 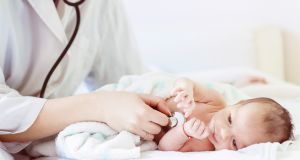 With other groups of doctors and health professionals having benefited from a reversal of FEMPI cuts, why are hospital consultants languishing on the cutback shelf? Photograph: iStock

After a long and tortuous gestation, the first fruits of a new national children’s hospital appeared this week. Children’s Health Ireland (CHI), which is overseeing the development of the new hospital, opened an urgent-care service at Connolly Hospital Blanchardstown, one of several satellite centres.

It opened after what CHI referred to as an “updated risk assessment and mitigation plan” had been put in place. This followed concerns expressed by some 30 of the State’s paediatric consultants, who warned CHI chief executive Eilish Hardiman in a letter that it would be unsafe to open the new urgent-care service at Connolly. It means opening hours at the centre will be restricted to between 8am and 6pm, Monday to Friday, because of a shortage of medical consultants.

Both doctors’ pay and a poor work culture in the health service have been blamed for the recruitment crisis at hospital consultant level. The problem affects all specialties and locations, with even prestigious teaching hospitals unable to attract suitable candidates. Probably the worst affected sector is psychiatry where latest figures show that just 302 out of 456 psychiatrist posts are filled on a permanent basis, while there are parts of the country with no child and adolescent psychiatrists in post.

Current staff recruitment issues, unless they are addressed, will be a multiple of the challenges facing Children's Health Ireland

It cannot be argued that hospital consultants are not well paid. However, former minister for health, James Reilly cut the salaries of new consultants appointed after 2012. It means that recently appointed medical professionals working in the same posts and performing the same tasks earn up to €60,000 less than longer-serving colleagues. Unsurprisingly, this has directly impacted recruitment efforts. And the question must be asked: with other groups health professionals having benefited from a reversal of Fempi cuts, why are hospital consultants languishing on the cutback shelf?

Minister for Health Simon Harris has acknowledged consultant pay disparity is a serious issue. However, he has yet to instruct his officials to engage with medical representative bodies on the matter. Nor can he hide behind public expenditure concerns. The Health Service Executive spent €114.5 million on medical locums last year. Restoring pay parity for newly appointed consultants would cost €22.5 million per annum.

The restricted opening of the Connolly paediatric satellite centre is a warning for the future. For it to function safely as an urgent-care centre it must have full laboratory and diagnostic X-ray services in place. And when it comes to opening the national children’s hospital, staff recruitment issues, unless they are addressed, will be even more intense. The onus is on everyone, not just the politicians and organs of the State, but including doctors, to make the new children’s hospital work.